The Pharisees assumed that if a person ate with sinners, that person was a sinner, too. Levi was a Jew who worked for the Roman government. He was a tax collector. Tax collectors were renowned for their dishonesty. If that were not bad enough, they were also ritually unclean. They rubbed shoulders with gentiles. Their clothing touched the unclean garments of gentiles. Their dishes and eating utensils weren’t purified.

The Pharisees, of course, were right. According to the Law, an Israelite who placed himself in contact with ritually unclean people became unclean as well (Leviticus 15:7; Numbers 19:22).

But the Pharisees knew Jesus was no ordinary Israelite. They had seen his healing miracles. They had heard him forgive sins, and they had witnessed his power to cast out evil spirits. With such demonstrations, Jesus disturbed the Pharisees. Their authority was thrown into question. The applecart of their prestige and influence among the people was upset. Their agendas for preparing Israel for its Messiah conflicted with Jesus and his kingdom. Their interpretation of Israel’s law was threatened. 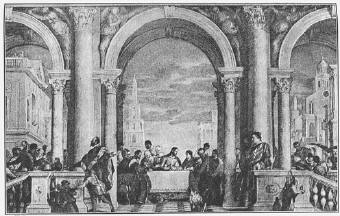 When they caught Jesus blatantly flaunting the Law by consorting with sinners and eating with impure hands from impure dishes with impure people, they knew such a man could not be from God.

From this passage, we learn that the grace of God ministered through Jesus Christ isn’t limited to righteous people. It extends to sinners, even to the kind of sinners that disturb righteous people.

Who could deny it? They saw it with their own eyes. They knew the facts. They knew the implications. And they were not the type to sit by and do nothing. They confronted Jesus’ disciples.

Mark does not tell us what Jesus’ disciples said. He only tells us that Jesus found out what the Pharisees were asking and answered the question himself. He told them that healthy people have no need of a physician, but rather those who have illness. It is interesting that the word Mark used here, which is translated “illness” in the NIV, and “sick” in most other translations, is kakos, which means “bad” or “evil.”

Jesus continued, “I have not come to call the righteous, but sinners.”

Regardless of when the conversations took place, the Pharisees made a foolish assumption. Of course, they did not know it was foolish. They assumed that they were “healthy people,” and that they had no need of a physician. They assumed that they were righteous, and that Jesus’ call to sinners did not apply to them. They had found righteousness in their diligent faithfulness to do everything they believed God had required of his people in the law.

Jesus said to Levi, “Follow me,” and Levi got up and followed him. Levi found righteousness in the Son of God. He saw with his own eyes what the accusing Pharisees also saw but could not recognize. He saw what Paul described in his letter to the Romans: “In the gospel the righteousness of God is revealed—a righteousness that is by faith from first to last, just as it is written: ‘The righteous will live by faith.’” (Romans 1:17).

Levi made no assumptions. He saw, he listened, and he believed. He trusted the One sent from God because he trusted God. May we, too, live by faith, not by assumptions.