Last summer, we took our grandchildren to the zoo. It was one of those progressive zoos where they try to recreate the animals’ natural habitat.

The Monkey House was especially effective. Instead of concrete cages and iron bars, only a plate-glass window separated us from the apes. A sociable orangutan ambled over to get a better look at his visitors. He stared at us for a while with an amiable expression on his moonlike face. Then, discovering he had been sitting on an orange, he pondered it for a moment, and then ate it. The children pointed and giggled. 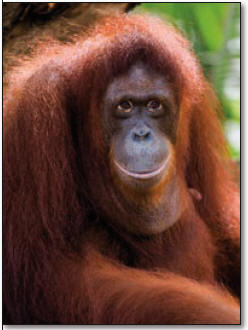 This orangutan obviously understood the first rule of showmanship: give the crowd what they want. He decided to give them an encore. So he vomited the orange into his hands and proceeded to eat it again.

“Oh gag!” “Yuk!” “That’s gross!” “He’s sooo revolting,” yelled the delighted kids. The ape looked pleased. Obviously he had hit upon a winning formula. So he regurgitated the orange yet again and ate it a third time. And then, egged on by his young supporters, he did it once more.

Confident now of audience reaction, the ape decided to expand his repertoire. The orange, even by his liberal standards, was showing signs of wear. So he smeared the mess on the glass. The children were now falling over themselves with laughter, while we parents and grandparents were looking decidedly queasy.

The show was by no means over. The orangutan had a few more tricks up his sleeve (so to speak) but I’ll spare you the details. Suffice it to say that my grandchildren have never forgotten that encounter.

Neither have I. As I watched the impromptu display of gastronomic versatility, it occurred to me that that is how you and I must look to God when we sin.

If that ape could have seen himself as we saw him, he might have behaved differently. But an animal does not have a conscience. We do. We have a sense of shame, and we know certain behavior is wrong. But we don’t always understand how wrong.

Obviously, in a civilized society, murder and robbery are unacceptable. But what about minor, whitecollar crimes, or being a little greedy? Or an “innocent” affair? A drunk, providing he isn’t hurting anybody, can be quite entertaining. Some people might even egg him on, like the children did that orangutan.

So where do we draw the line? Who decides?

God says he does. And he tells us that wrong living (he gives it the politically incorrect label “sin”) kills us in the end.

But God wants to get rid of all our sin so we can live forever, in peace, with him and one another.

The point is, God does not think sin is a laughing matter. But because he loves us, and wants us to be with him forever, he has provided the means by which we can be cleaned up.

Paul, in his epistle to the Romans, explained it like this: “Out of sheer generosity, he put us in right standing with himself. A pure gift. He got us out of the mess we are in and restored us to where he always wanted us to be. And he did it by means of Jesus Christ. God sacrificed Jesus on the altar of that world to clear the world of sin” (Romans 3:22-25, Message Version).

Unfortunately, the image of the man on the cross has become more of a cliché than a life-changing reality.

So I want to take you to the edge of another crowd. Not at a zoo this time, but to a hill just outside the walls of Jerusalem. It is a spring day, about 2,000 years ago.

The crowd has gathered to watch a public execution. The victim is about to be nailed to his cross. A few hours ago, he had been a strong and vigorous man, in his prime. But in accordance with Roman custom, he has been thrashed with a brutal scourge. It has inflicted terrible wounds. His tormentors also pushed a crown made from thorn bushes down on his head. His face, which once may have been ruggedly handsome, is now disfigured to the point of being hideous. People draw back in revulsion. The victim is as ugly as sin.

What has he done to deserve such punishment? Was he a mass murderer? Or a vicious criminal? A terrorist, responsible for destroying many innocent lives?

No one seemed to know for sure.

“Apparently he said he was the Son of God,” explains one of the bystanders.

It was true. His enemies had tried to trump up charges against him by bribing false witnesses, but they kept contradicting one another. In the end, he gave his accusers the evidence they needed.

“Tell us plainly, are you the Christ, the Son of God?” asked the high priest.

That was enough to have him crucified. In one way, this was a terrible miscarriage of justice. But in another, it was not. You see, the Son of God, Jesus, had come to die, not for what he was, but for what we had become. He was accepting the consequences for what we have done.

Hey, wait a minute! That’s a bit extreme, isn’t it? Maybe if you sin by killing someone, or do something else really bad. But for the kind of things most of us have done, wouldn’t a rap over the knuckles, or maybe a good strong talking-to be enough?

That is the problem with judging sin by our own standards. God knows the long-term consequences of behavior that we think is “not too bad,” or even funny. Sin, all sin, when reflected in the light of God’s love, looks very ugly indeed. Our heavenly Father does not want us to be slaves to sin any more than we would want our children to be dinner guests of that orangutan.

What can we do about it? Nothing. Absolutely nothing. That’s another dilemma. We can do nothing about it. Even if we stop sinning now, it cannot erase the damage already done. You and I need someone to save us and clean up our mess. That explains what is happening on this hill. Suddenly sin is no laughing matter. This is what “Jesus died for you” means.

You wait during the hours of agony as Jesus’ life drains away. Some in the crowd are taunting and mocking the tortured man. “If you’re the Son of God, come down off the cross.” “He saved others, but he can’t save himself.” You breathe a sigh of relief as Jesus calls out “It is finished” and dies.

Three days later he is alive again. Alive in a way no human has ever been. Shining, radiant, eternal. And his eternal resources are focused on helping you be like him, beautiful as only a person freed from the bondage of sin can be.