In December 2011, Crossing Borders mission team had an eventful trip to Mexico to deliver shoebox gifts to our partner churches. This turned out to be the most challenging of the 13 mission trips we have made since 2005. 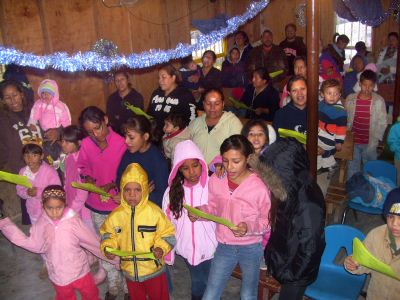 Many congregations and individuals from all over the USA joined in our effort this year. We ended up with almost 600 shoeboxes full of gifts as well as handmade baby blankets and pillows, boxes of infant supplies, custom-carved wooden cars, several boxes of nice shoes, bags of good clothing and other items. Finding space in the vehicles to transport the items across the border was a real problem—the kind of problem we like to have.

The crossing into Mexico from Laredo, Texas, on Saturday started out well with visits to two churches. However, it was raining hard and our vans got stuck axle deep in mud at the second church. A tow truck was called but it got stuck too. Then the host pastor’s van and another vehicle became stuck.

While some worked outside to free the vehicles, the rest of the Crossing Borders group and local church members prayed and visited inside the unheated church. After four hours of struggling in the cold rain and slippery mud (and a lot of prayer), a truck from the fire department arrived to free the final vehicles.

Then on to the final stop of the day. What was supposed to be lunch served at the children’s home turned out to be supper. Soaking wet and cold in our muddy clothes, we visited with the kids for an hour and a half, distributed shoeboxes and provided the meal for them. Now well past dark, we headed back across the border to warm showers and our own dinner, thankful for the day’s experiences and inspired by the patient and willing spirit exhibited by all.

With the shoeboxes delivered, most of the participants headed back home. But I, my mother Jean Berger, and Steve and Barbara Solari had planned to fly to Ciudad Victoria to take gifts to Karen Salinas and her 17 foster children. This was the first time we had ventured into interior Mexico, and once again, things didn’t go quite as planned.

The flight was cancelled on Sunday due to bad weather, and then cancelled again on Monday. On Tuesday the weather was bad again, so the group took the commercial bus to Victoria. We were grateful that it was a comfortable, modern bus. We arrived in Victoria at about midnight. Karen and several of the older children had waited up for us. They visited with the Crossing Borders team into the wee hours of the morning.

We woke up to clear and warm weather. We spent the day visiting and playing with the children, and had a gift-giving party to deliver the gifts donated by people in the USA. Each child also received a bilingual Bible with their name engraved on the cover. There were also some moving testimonials from several of these lovely children being brought up in the nurture of the Lord.

Thursday was filled with playing with the kids, picking them up at school, having a boys-vs.-girls cookie bake-off, and other special events. Again, because of donations from supporters, we were able to purchase several hundred dollars worth of supplies to restock the needs of the foster home.

After an event-filled and challenging week, we returned to Laredo on Friday—by bus again, as the flights were still affected by bad weather. By Saturday everyone was back home in the United States, safe and sound—thankful to God for an amazing trip full of unexpected obstacles that led to many wonderful opportunities to serve others on mission with God. We are already looking forward to our next trip to Mexico.

When we present the gifts to our Mexican friends, we always tell them that these gifts were given by people who don’t even know them, but who love them nonetheless—with the love that God shares with all of his beloved children. To all the individuals, churches and other groups who sent support this year, we pass along to you the Muchas Gracias (many thanks) from the children, families and ministry servants you supported.