This book is a compilation of articles that are available for free in digital form. If you wish to purchase them printed in book form, click on the image below. 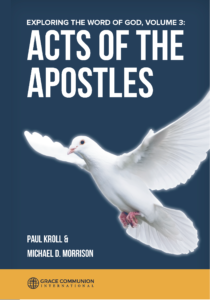 “Exploring the Word of God” began in the mid 1990s. We printed a volume on the books of Moses, but the series was not continued, and the first volume is now out of print. However, we had a substantial amount of material written, and we added more in the intervening years. These materials have been edited and we share them on our website. We have also compiled our articles on Acts and are happy to make them available through print-on-demand publishing.
Acts tells the story of how Christianity began and spread. No history book ever has enough space to tell all the facts. The historian must select the facts that are most important and the events that played critical roles in the development of later situations. The historian must interpret the facts and present them in an organized way. Luke does this well. With literary skill, he gives numerous details and interesting personality sketches that help us understand what happened.
Luke, in addition to being a historian, is also a Christian writing about his own faith. In the introduction to his first volume of history, he says that one of his purposes is to help readers understand the truthfulness of the Christian faith (Luke 1:4). Similarly, Luke has selected events in church history that help show Christian doctrine and practice; he has quietly omitted facts that might confuse the reader. Regarding circumcision, for example, he says there was a heated debate (Acts 15:2), but he reports the arguments of only one side of the controversy. What Luke writes is true – it is historically accurate – but it is also theologically selective.
Several speeches or sermons in Acts are concise presentations of the gospel. They argue that Jesus is the Messiah, that he fulfilled Old Testament prophecies, that God raised him from the dead and that he is the answer to Jewish and Gentile hopes. Speeches are better at communicating these ideas than a historical description could be.
While Luke tells the story of the spread of the Christian gospel from Jerusalem to Rome, he is also able to achieve some additional purposes:
to explain why Christianity was becoming more Gentile than Jewish,
to show that Christianity was not a threat to the Roman government, and
to defend Paul from accusations that he was preaching against Judaism.