“If your right hand causes you to sin, cut it off and throw it away,” said Jesus. “It is better for you to lose one part of your body than for your whole body to go into hell” (Matthew 5:30). Hell is serious. We need to take Jesus’ warning seriously.

In one parable, Jesus warned that wicked people will be thrown into a fiery furnace (Matthew 13:50). In this parable, he did not talk about incineration, but about “weeping and gnashing of teeth.” In another parable, Jesus describes the punishment of a forgiven slave who would not forgive a fellow slave as “torture” (Matthew 18:34). Another parable describes the wicked person as tied up and thrown “into the darkness” (Matthew 22:13). This darkness is described as a place of weeping and grinding of teeth.

Jesus does, however, warn people in vivid terms not to hang on to anything that would cause them to be thrown into eternal fire: “If your hand or your foot causes you to sin,” Jesus warned, “cut it off and throw it away. It is better for you to enter life maimed or crippled than to have two hands or two feet and be thrown into eternal fire” (Matthew 18:7-8). It is better to deny yourself in this life than to be “thrown into the fire of hell” (verse 9).

Does the punishing of the wicked last forever? The Bible can be interpreted in different ways on that. Some verses suggest eternal suffering, while others suggest a limited duration. But either way, hell is to be avoided at all costs. 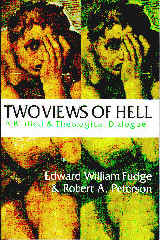 This reminds me of a book on this subject: Two Views of Hell. Edward Fudge argues for annihilation; Robert Peterson argues for eternal suffering. On the cover of this book are two men, both with hand over face in an expression of dread or horror. The point being made with the graphic is that even though there are two views of hell, no matter how you look at hell, it is ghastly. God is merciful, but the person who opposes God refuses his mercy and therefore suffers.

Jesus used a variety of word-pictures for the punishment of those who refuse the mercy of God: fire, darkness, torture and destruction.

The apostles also talked about judgment and punishment, but they described it in different ways. Paul wrote, “For those who are self-seeking and who reject the truth and follow evil, there will be wrath and anger. There will be trouble and distress for every human being who does evil” (Romans 2:9).

Regarding those who were persecuting the church at Thessalonica, Paul wrote, “They will be punished with everlasting destruction and shut out from the presence of the Lord and from the majesty of his power” (2 Thessalonians 1:9). So we define hell as “separation and alienation from God.”

The Old Testament penalty for rejecting Moses was death, but anyone who deliberately rejects Jesus deserves a greater punishment, says Hebrews 10:28-29. “It is a dreadful thing to fall into the hands of the living God” (verse 31). God is merciful beyond imagination, but if people refuse his mercy, only judgment is left. They will reap the consequences of their own actions.

God does not want anyone to suffer the horrors of hell — he wants everyone to come to repentance and salvation (2 Peter 2:9). But those who refuse such wonderful grace will suffer. That is their choice, not God’s. Thus we say that hell is “chosen by incorrigible sinners.” That is an important part of the picture.

The final victory of God is also an important part of the picture. Everything will be brought under the control of Christ, for he has redeemed all creation (1 Corinthians 15:20-24; Colossians 1:20). Everything will be set right. Even death and Hades will be destroyed in the end (Revelation 20:14). The Bible does not tell us how hell fits into that picture, nor do we claim to know. We simply trust that God, full of righteousness and mercy, will conclude it all in the best possible way.

Of all that Jesus taught about hell, the most important thing is that Jesus is the solution to the problem. In him, there is no condemnation (Romans 8:1). He is the way, the truth and the life eternal.

The justice and mercy of God

A God of love would not torture people forever and ever, say some people. The Bible reveals God to be compassionate. He would rather put people out of their misery than see them suffer eternally. The traditional doctrine of an ever-punishing hell, many believe, portrays God as a vengeful sadist who sets a terrible example. Moreover, it would not be right to punish people forever for a life that lasted only a few years or decades, say some.

But rebellion against God is infinitely terrible, say some theologians. We cannot measure evil by the time it takes to commit it, they explain. A murder may take only a few minutes, yet the consequences may extend over decades or centuries. Rebelling against God is the most serious crime in the universe, they contend, so it demands the worst punishment.

Unfortunately, humans don’t have a very good handle on either justice or mercy. Humans are not qualified to judge, but Jesus Christ is. He will judge the world righteously (Psalm 9:8; John 5:22; Romans 2:6-11). We can trust his judgment, knowing he will be both righteous and merciful.