I am a trustee of a British Christian magazine. We are not a church, nor a counseling agency, but often people do write to us for help. We are not equipped to answer every letter, but there are some we just can’t ignore. The managing editor sent one such letter to me recently, and asked me to pray about it. 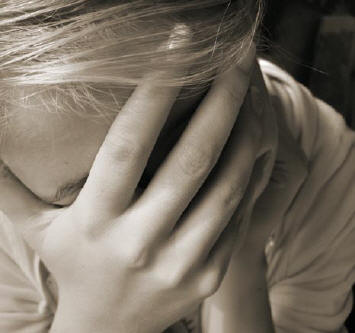 Let me quote a few excerpts.

“Will you please pray for me and my family? Last week I was told I have cancer again, the second time in 20 years…. Last year I was told I was a diabetic. “I am frightened. I cannot pray, as I don’t know how…. Many bad thoughts are running through my mind…. My husband is worried sick.

“I have no friends I can trust… friends have failed me in the past. One even cursed me…. Now I think these bad things have happened because of her curse. Since Mum died it has been one thing after another…. I think God hates me. I can’t blame him—I hate myself.”

This letter affected me deeply. I read it with tears in my eyes, feeling this person’s sadness and sorrow in every line. She was so obviously worn out, discouraged and suffering from depression. I am not qualified to offer help in those areas, although I knew enough to suggest that she seek professional help.

The disturbing line of her letter, the one that stood out, that shrieked at me, was this: “I think God hates me. I can’t blame him—I hate myself.”

Well, as a minister, and as a Christian who has had his share of ups and downs, I am qualified to offer her some advice about this. There is no one—no one—whom God hates.

But so many of us feel that way at times, don’t we? We may not reach the depths of despair that this reader felt. But we do feel unworthy of God’s love and care, and may even be afraid to pray to him because of the unworthiness we feel.

Unfortunately, some may see this woman’s statement as a lack of faith and wonder how anyone who calls herself a “Christian” can think that God hates her. Their advice might be, “Stop that nonsense. Pull yourself together. You should be ashamed of making such a statement about God.” They may point to some upbeat scriptures to show there is no excuse for a Christian to ever be so depressed.

Well, they are wrong.

And even if they were right, it is not what this lady needs to hear right now. She doesn’t need criticism or correction. She needs someone to listen and to share her problems without any judgment or “fast-fix instant solution.” Society can grind people down and make them feel emotionally drained. Add to that the pressure of a life-threatening illness and the comparatively recent loss of a parent and it’s easy to understand why they may feel God has cursed them. It can happen even to the greatest of God’s servants—like Elijah.

Few people ever worked as hard, or risked as much in God’s service as Elijah did. But, almost immediately after one of his greatest triumphs (you can read the story in the Old Testament book of 1 Kings, chapter 18), we find him exhausted, frightened, depressed and ready to end it all.

The Bible tells us that he ran off into the desert wilderness, lay down under a tree and told God, “I have had enough, Lord. Take my life; I am no better than my ancestors.” 1 Kings 19:4-5. Then he lay down under the tree and fell asleep.

That was probably the best thing he could have done. It’s hard to see things straight when you are exhausted. So God let him rest a while. And then, instead of criticizing him for his lack of faith, God began to carefully refocus him on doing the work he had been called to do.

God does not throw people away when they break down. His love for us does not depend on our love for him. The Psalms remind us:

“As high as the heavens are above the earth, so great is his love for those who fear him. As far as the east is from the west, so far has he removed our transgressions from us. As a father has compassion on his children, so the LORD has compassion on those who fear him; for he knows how we are formed, he remembers that we are dust.” Psalm 103:11-14.

God’s love for us does not depend on our state of mind or adherence to a set of rules and regulations. Neither does it depend on whether we are fit and well or struggling or sick, on whether we are fat or thin, tall or short, young or old, nor on the color of our skin, our job, financial position or our family.

God loves us so much that in John 3:16 we are told that he gave his one and only Son for us.

As Paul reminded the Christians at Rome, “You see, at just the right time, when we were still powerless, Christ died for the ungodly. Very rarely will anyone die for a righteous man, though for a good man someone might possibly dare to die. But God demonstrates his own love for us in this: While we were still sinners, Christ died for us.” Romans 5:6-8.

You are not alone

I know that this is hard to understand. We are tempted to think, “Yes, that’s maybe true for most people, but not for me.” I empathize because I too have had some of life’s ups and downs. My parents divorced when I was 8 years old. In fact there have been in my family of two brothers and one sister, and my wife’s family of one sister—including our parents—a total of 12 divorces.

My sister died when she was 29, leaving two small children. One of my brothers was killed in a car accident 12 years ago. My father and one of my brothers were both alcoholics, my father dying at 58 as a result, while both spent time in prison. My own business collapsed and it took ten years to pay off the debts. And as a result of doctrinal changes in our church I lost close friends of many years standing.

So I have some understanding of what the writer felt during this troubled period of her life. Through it all I’ve come to know that God loves me and I can confidently assure her that God loves her, too. Just as he does you.

There are no quick and easy answers in times of severe trial and difficulty. Sometimes we have to endure through the pain. Only in retrospect can we take a more balanced and calmer look at our trials, but even then we naturally ask the question, “Why me?”

Don’t be afraid to ask for help

We don’t always know the answers. In fact, we rarely do. Life is seldom fair, and, as Elijah had to learn, walking with God does not put you in an insulated bubble and guarantee you freedom from trials and problems, not even from the private hell of depression. So don’t be afraid to get some professional help when you need it. And don’t be afraid to ask for prayers and support.

Before I finish, may I remind you of something else Paul wrote?

“So, what do you think? With God on our side like this, how can we lose? If God didn’t hesitate to put everything on the line for us, embracing our condition and exposing himself to the worst by sending his own Son, is there anything else he wouldn’t gladly and freely do for us?

“And who would dare tangle with God by messing with one of God’s chosen? Who would dare even to point a finger? The One who died for us—who was raised to life for us!—is in the presence of God at this very moment sticking up for us.

“Do you think anyone is going to be able to drive a wedge between us and Christ’s love for us? There is no way! Not trouble, not hard times, not hatred, not hunger, not homelessness, not bullying threats, not backstabbing, not even the worst sins listed in Scripture.” Romans 8:31-35, The Message Bible. •

Keith Hartrick is a trustee of the UK Plain Truth magazine. He lives in Bradford, England.