In the first-century world, the way Jesus treated
women was considered revolutionary. 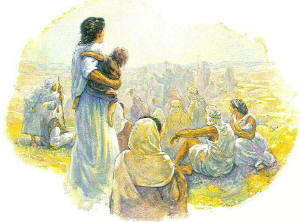 When she became a teenager, her father made the arrangements. This was the custom of the times. Mary would be married to a carpenter, Joseph, the son of Heli. From birth, Mary’s role in life was set, for she was born female to a Jewish family. Yet her role in history was to be extraordinary. God chose her to be the mother of Jesus.

When the angel Gabriel came to Mary, she was initially troubled by what the angel’s appearance might mean. The angel reassured her, explaining that she was the one chosen to be the mother of Jesus.

“How will this be,” Mary asked the angel, “since I am a virgin?”

The angel answered, “The Holy Spirit will come upon you, and the power of the Most High will overshadow you. So the holy one to be born will be called the Son of God. Even Elizabeth your relative is going to have a child in her old age, and she who was said to be barren is in her sixth month. For nothing is impossible with God.”

Though she knew she was facing shame and humiliation, Mary, in faith, willingly submitted herself to God’s will. She understood that it was possible that Joseph would not marry her. She would be considered damaged goods. Mary acted in great courage and faith.

Though God protected her by showing Joseph in a dream that he should accept her in marriage in spite of her being pregnant, the story of her pregnancy was out.

Nevertheless, Joseph faithfully married an already pregnant Mary. A legacy of raised-eyebrow, finger-pointing gossip would follow them and Jesus throughout their lives.

Jesus Christ honored his mother throughout his life and at his crucifixion. Mary was at the foot of the cross. When Jesus saw her there, no doubt in shock at what she was witnessing, he compassionately let her and John know how she would be cared for after his death and after his resurrection:

When Jesus saw his mother there, and the disciple whom he loved standing nearby, he said to his mother. “Dear woman, here is ‘your
son,’ and to the disciple, ‘Here is your mother.’ From that time on, this disciple took her into his home. (John 19:26-27)

Jesus’ honor and respect was not reserved simply for his mother. It was extended to all women—an attitude largely unexpected and unknown in his culture and time. Jesus, unlike the men of his generation and culture, taught that women were equal to men in the sight of God. Women could receive God’s forgiveness and grace. Women, as well as men, could be among Christ’s personal followers. Women could be full participants in the kingdom of God. Jesus offered full discipleship to women.

These were revolutionary ideas. Many of his contemporaries, including his disciples, were shocked. Women were overjoyed and  rateful, of course, and many dedicated their lives to his service. Let’s take a look, from the historical narratives in Scripture, at a few of these women of faith and how Jesus dealt with them.

In the early days of Jesus’ ministry, one of the most unusual examples is the devoted following of Mary Magdalene. Among the group of women who traveled with Jesus and his 12 disciples was Mary of Magdala (Luke 8:2). Mary is almost always mentioned first in a list of the female disciples of Jesus Christ. She may have been one of the leaders of that group of women who followed Jesus from the outset of his ministry in Galilee to his death and afterward.

The risen Jesus appeared to her first. It’s ironic that in a time when women could not be legal witnesses, Jesus Christ chose women as the first witnesses of his resurrection. As British writer Dorothy L. Sayers said: “Perhaps it is no wonder that the women were first at the Cradle and last at the Cross. They had never known a man like this Man—there never has been such another. A prophet and teacher who never nagged at them, never flattered or coaxed or patronised: who never made arch jokes about them…who rebuked without querulousness and praised without condescension: who took their questions and arguments seriously” (Are Women
Human?, page 47).

Jesus Christ taught that women were just as responsible for growing in grace and knowledge as men when it came to being one of his followers. This is clearly expressed in Luke’s account of Christ’s visit to the home of Martha and Mary, who lived in Bethany, a village about 2 miles from Jerusalem. Martha had invited Jesus and his disciples to her home for a meal. But while Martha was busily preparing to serve her guests, her sister, Mary, was listening to Jesus along with the rest of his disciples.

As Jesus and his disciples were on their way, he came to a village where a woman named Martha opened her home to him. She had a sister called Mary, who sat at the Lord’s feet listening to what he said. But Martha was distracted by all the preparations that had to be made. She came to him and asked, “Lord, don’t you care that my sister has left me to do the work by myself? Tell her to help me!” (Luke 10:38-40)

Martha seems to have been the older sister and head of her own house. Jesus didn’t chastise Martha for being busy serving, but he told her that her sister, Mary, was the one who actually had her priorities straight. “Martha, Martha,” the Lord answered, “you are worried and upset about many things, but only one thing is needed. Mary has chosen what is better, and it will not be taken away from her” (verses 41-42).

Jesus expected women as well as men to learn from him. Jesus did not feel that women’s work
or men’s work, for that matter— wasn’t important. He was not saying it is wrong to be diligent and careful about our responsibilities. Christ was saying we should get our priorities straight. Women were called to be disciples of Jesus, just as men were, and women were expected to fulfill their spiritual responsibilities, just as men were.

A daughter of Abraham

Another fascinating account is Luke’s story of the healing of a disabled woman—on the Sabbath day, in the synagogue, right in front of the synagogue ruler. The healing not only shows Christ personally contrasting his new way of life with the old legalistic, pharisaical restrictions, but it also shows his deep regard for women.

On a Sabbath Jesus was teaching in one of the synagogues, and a woman was there who had been crippled by a spirit for eighteen years. She was bent over and could not straighten up at all. When Jesus saw her, he called her forward and said to her, “Woman, you are set free from your infirmity.” Then he put his hands on her, and immediately she straightened up and praised God. (Luke 13:10-13)

The ruler of the synagogue immediately protested. He indignantly told the people there were six other days they could be healed. This was his means of chastising Christ for what the religious ruler considered as breaking the Sabbath. Was Christ intimidated by these words? Not in the least.

“You hypocrites! Doesn’t each of you on the Sabbath untie his ox or donkey from the stall and
lead it out to give it water? Then should not this woman, a daughter of Abraham, whom Satan has kept bound for eighteen long years, be set free on the Sabbath day from what bound her?” (verses 15-16).

Jesus Christ not only faced the wrath of the Jewish leaders by healing this woman on the Sabbath, he showed his regard for her by calling her a “daughter of Abraham.” “The idea of being a son of Abraham was common enough. Jesus used that term in reference to Zacchaeus a few chapters later in Luke. But Jesus with this one modification of the phrase—from ‘son’ to ‘daughter’—raises this formerly pitiful woman to a new status,” say authors Ruth A. Tucker and Walter Liefeld  (Daughters of the Church, page 31).

Before his most venomous critics, Jesus publicly showed his concern and high regard for this
woman, someone whom others had probably seen for years as she struggled in her affliction to come to the synagogue to worship God. Someone whom they may well have shunned because she was a woman and because she was disabled.

The Bible doesn’t specify just how many women traveled with Jesus and his male disciples, but Luke records the names of a prominent few, and mentions there were “many others.”

After this, Jesus traveled about from one town and village to another, proclaiming the good news of the kingdom of God. The Twelve were with him, and also some women who had been cured of evil spirits and diseases: Mary (called Magdalene) from whom seven demons had come out; Joanna the wife of Cuza, the manager of Herod’s household: Susanna: and many others. These women were helping to support them out of their own means. (Luke 8:1-3)

Think about these remarkable words. Here were women not only associating with Jesus Christ and his male disciples, but traveling along with them.  Also, notice that at least some of these women—possibly widows—had control of their own finances. It was out of their generosity that Jesus and his disciples were at least partially supported.

Although Christ worked with the cultural traditions of the first century, he ignored the limitations that had been placed on women by their culture. Women were free to follow him and to take part in his ministry to the world.

All are one in Christ

In Christ we are all children of God. As the apostle Paul wrote: “You are all sons of God through faith in Christ Jesus, for all of you who were baptized into Christ have clothed yourselves with Christ. There is neither Jew nor Greek, slave nor free, male nor female, for you are all one in Christ Jesus” (Galatians 3:26-28).

Paul’s significant words, especially where they concern women, are bold even now, and certainly were astonishing in the time he wrote them. This was another of Paul’s transitional statements showing that a new covenant relationship through Christ had begun.

Now we have a new life in Christ. All Christians have a new relationship with God. Through Christ, we—both male and female—have become God’s own children and one in Jesus Christ. Christ is calling all—men and women—to repentance and a new way of life. Jesus
showed through personal example that it’s time to put aside the old biases, the feelings of superiority over others, the feelings of resentment and anger, and to walk in newness of life with him and through him.

Many of you are striving to be women of faith. Many of you, like the bent-over woman healed by Christ in the synagogue, have to overlook some discrimination as you faithfully worship God and serve him. Don’t get discouraged and give up. Jesus Christ calls you equal in every way in his sight, and heirs to his promises. And, as you humbly follow him, Christ will use you in his service.

And, for those of you who haven’t taken that step, just as he freed that poor woman from Satan’s debilitating physical affliction on her, Christ promises to free you, and all
his “daughters of Abraham” who repent and follow him. Jesus Christ wants you in his kingdom.