I was 12 years old, my parents took me and my two brothers and my best friend to New Orleans to see the Minnesota Vikings play the Saints. Being from a small town in south Mississippi, I considered the chance to go to New Orleans a great treat in itself. But given that the Vikings were my all-time favorite football team, this trip was one of the highlights of my youth. The three hours it took to drive to New Orleans seemed to me an eternal day. But we finally got there, and my dad parked the car. We took a trolley to the old Tulane stadium. It was a magnificent afternoon, and the game was everything I had dreamed it would be, including a Viking rout. 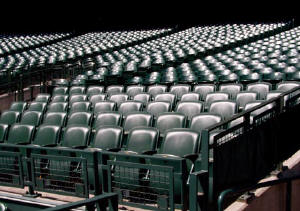 After the game, we were walking down the exit ramp when I looked over the rail and saw three busses lined up, and I recognized the huge men boarding the busses as the Viking players themselves. Without thinking, I ran down the ramp and somehow made my way to the players. I actually shook hands with Carl Eller and was inches away from Alan Page and Wally Hilgenberg. And I got to touch Coach Bud Grant’s hat. Needless to say, I was in heaven.

Then one by one, the busses began to drive away. I remember watching them roll alongside the stadium and turn left, out of sight. When the last bus was gone, I looked around and there was not another person in sight, not one. The greatest of all fears seized my little heart. I suddenly realized that I had no idea where my parents were, and worse, that they had no idea where I was. Sheer panic gripped me. I did not have a clue as to what to do. My heart was racing so fast I could not even think.

“As I sat there, lost and alone, my 12 years of life flashing before my eyes, the stadium lights suddenly went off!”

Twelve years old, New Orleans, Tulane Stadium, and it was getting dark. I was a long way from being street-smart, but I knew to the roots of my soul that I was in trouble. At some point it dawned on me to find a policeman, but there were none. I could not find another person, let alone a policeman, and I walked around that entire stadium at least three times.

By this time I was frantic and crying my eyes out. There were plenty of houses around, but I was not about to go to one for help. The only thing I knew to do was to try to find my way back to the car. I thought of the trolley that we had taken to the stadium, but which one? North and south were meaningless to me on the streets of New Orleans, and I had no idea which direction to go anyway. I did not even remember any street names. But I had some money in my pocket, so I found a trolley car and got on and told the driver that I was lost. He told me to get in the back of the trolley and keep my eyes peeled, and if I saw anything, to pull the cable and he would stop.

As the trolley made its way around New Orleans, I jumped from one side to the other, pressing my face against the cold windows, hoping, just hoping, that I would see something that I recognized — a tree, a building, a street, a parked car, who knows — maybe even my parents. But it did not happen. I rode that car all the way around its circuit until it got back to the stadium. Not knowing what else to do, I got off and walked around the stadium all the way back to where the busses had been. Alone and scared to death, I sat down under an oak tree in a pile of leaves. I remember fiddling with a stick and crying, but there were no more tears. It was pitiful.

But things got worse. As I sat there, my 12 years of life flashing before my eyes, the stadium lights suddenly went off. I have never experienced darkness like that. Nearly 30 years later, I can still see the darting, haunting shadows of that place and still smell the concrete and hear the leaves rustling in the cold wind. I don’t know how long I sat there, but it seemed like hours, certainly longer than the eternal ride to the stadium. It was so dark. I was so alone and cold.

And then suddenly, the stadium lights came on, and before I knew what was happening, I was on my feet running around the stadium. Someone had to have turned the lights on, and I was determined with the fire of the universe to find that someone. And then it happened. Over the noise of my footsteps and the pounding of my fears, I heard the most blessed sound in all of New Orleans, the most blessed sound I had ever heard in my life. One shouted word.

“Baxter!” It was my father.

This story is a living picture of how Christianity works. It is not about rules and regulations or frantically trying to save ourselves. Christianity is about being found. The Christian life is about hearing Jesus’ Father speak our names, because in hearing him speak our names, we experience something that we could never create or maintain for ourselves — unearthly assurance.

The question is, Why is it so hard for us to hear Jesus’ Father call our names? After all, he’s been speaking to us all our lives, and nothing thrills the Father more than to see us live our lives out of this baptism of unearthly assurance. The problem, as you might imagine, is on our end; it has to do with our own mindset. But more on our fallen minds next issue. For now, here is a prayer for us:

Lord Jesus Christ, beloved, eternal and faithful Son of the Father, share your own ears with me. Give me your eyes, your mind, your fellowship with your Father, that I may know him with you and live and work and play in the freedom of the Holy Spirit.

C. Baxter Kruger is the Director of Perichoresis Ministries and the President of Mediator Lures. He is an author of seven books, including The Great Dance, Jesus and the Undoing of Adam and Across All Worlds. For more information on Dr. Kruger visit the Perichoresis web site, www.perichoresis.org. This story was originally published in C. Baxter Kruger, The Great Dance (Jackson, Miss.: Perichoresis Press, 2000, and Vancouver, British Columbia: Regent College Publishing, 2005).