Christians are occasionally challenged to study afresh some subjects we thought we already understood. And when we think we understand a subject, there is no way to learn something new about it without also admitting that we didn’t understand it as well as we thought we did. Sometimes this is easy to do, and sometimes it is very difficult. It usually takes some time for the truth to sink in, and often we learn these new things not all at once, but a step at a time. There is a story in the Gospel of Mark that illustrates this.

We are not the only ones who have to learn new things. The disciples of Jesus Christ also had to learn — they had a lot to learn. The four Gospels often tell us that the disciples did not understand. It seems that they misunderstood more often than they understood Jesus correctly.

I find that encouraging. If Jesus could teach them, then he can also teach me. If he was patient with them, then he is also patient with me. If there were times when they did not understand — and there were — then it should not surprise me that I don’t always understand it right the first time, too. So I learn. That’s what I’m supposed to be doing.

In Mark 6, Jesus had just fed 5,000 people by miraculously multiplying five loaves of bread and two fish. The disciples were rowing back across the sea of Galilee, and Jesus came to them walking on the water. “Then he climbed into the boat with them, and the wind died down. They were completely amazed, for they had not understood about the loaves; their hearts were hardened” (vs. 51-52).

Jesus may have done hundreds or thousands of miracles. But only a few are described in writing. It makes sense that the Gospel writers wrote down the miracles that were more significant than the others. These miracles give us particular lessons that help us understand who Jesus was and what he did.

Now let’s move to another miracle in the Gospel of Mark, in chapter 8. This happens to be after Jesus miraculously fed another large crowd. We’ll begin in verse 22: “They came to Bethsaida, and some people brought a blind man and begged Jesus to touch him. He took the blind man by the hand and led him outside the village. When he had spit on the man’s eyes and put his hands on him, Jesus asked, `Do you see anything?'”

Verses 24-25: “He looked up and said, `I see people; they look like trees walking around.’ Once more Jesus put his hands on the man’s eyes. Then his eyes were opened, his sight was restored, and he saw everything clearly.”

This is the only miracle in the Gospels in which Jesus didn’t do a complete healing on the very first attempt. Jesus could heal a man born blind in an instant — perfect eyesight — but here the man’s vision was restored only partially. Why do you think that was? Do you think it was for the man’s benefit, or for the benefit of the disciples? I believe it was for the disciples. There was something here that had a special meaning for them.

Every time Jesus healed a blind person, he was expressing, in his actions, the fact that he is the one who gives us spiritual sight. We were walking in darkness, and he has given us light. The song “Amazing Grace” says, “I once was blind, and now I see.” It’s talking about spiritual sight and understanding. Before God called us, we were spiritually blind and ignorant. But he opens our eyes — turns on the lights — so we can begin to understand.

But it usually doesn’t happen instantly. Our vision is blurred at first. We can see, but we can’t see perfectly. We understand, but only in part. It takes another anointing before we can see correctly. 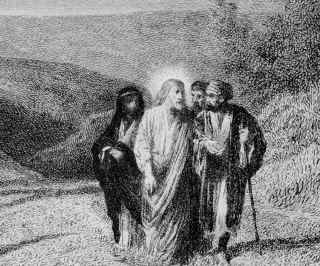 If we continue reading in Mark 8, we will see an example of this. Peter himself had to learn about Jesus Christ in two major steps. “Jesus and his disciples went on to the villages around Caesarea Philippi. On the way he asked them, `Who do people say I am?’ They replied, `Some say John the Baptist; others say Elijah; and still others, one of the prophets.’ `But what about you?’ he asked. `Who do you say I am?’ Peter answered, `You are the Christ'” (vs. 27-29).

Peter had the right answer. We know from Matthew’s account that Peter didn’t get the right answer because he was unusually smart. Rather, it was revealed to him by God. God had helped him understand that Jesus was the the Messiah. (We might notice here something about the way God reveals things to his people. Peter didn’t hear a voice telling him that Jesus was the Messiah. Peter thought he had figured this out for himself, but Jesus said that his thought processes had been guided by God. God can reveal things to us through our own thought processes.)

But Peter’s understanding was not complete. His vision of a Messiah was no more accurate than trees walking around. Peter had the right word, but a very wrong idea of what a Messiah would do. Peter was looking for the same kind of Messiah that the Pharisees were looking for — a military hero who would rescue the Jews from the Romans.

But Jesus was not that sort of Messiah, and he began to explain this: “He then began to teach them that the Son of Man must suffer many things and be rejected by the elders, chief priests and teachers of the law, and that he must be killed and after three days rise again. He spoke plainly about this, and Peter took him aside and began to rebuke him” (vs. 31-32).

This talk about suffering and death didn’t fit into Peter’s picture. “Not so, Lord,” he said. “We aren’t going to let that happen to you. We’ll fight! You are the Messiah. We won’t let you be killed!”

Peter was trying to get Jesus to seize the kingdom. Little did he know that Jesus had already been tempted with that sort of idea. The devil had already offered to give Jesus all the power of this world. But Jesus said no, because the enemy he need to conquer was not the Romans — it was sin, and the only way he could conquer sin was to die on the cross.

So Jesus looked at his disciples and rebuked Peter. “Get behind me, Satan!” he said. “You do not have in mind the things of God, but the things of men” (v. 33).

It should be no surprise that Peter was thinking the things of men. After all, he was a human. We are, too, and sometimes we can get stuck thinking of things from a human perspective. We don’t always see the full picture right away.

In verse 34, Jesus began to teach that all his disciples must be willing to suffer and die. Peter still didn’t understand what Jesus was teaching, but that was no excuse to go away. Peter had enough faith in Jesus, and enough patience, to stay where he was, even if he didn’t always like what he heard (cf. John 6:66). Peter had things to learn, and he couldn’t learn them if he ran away. God had revealed some truth to Peter, but Peter still had things to learn. How long did it take? One year? Two years? Three? How long did it take him, even after the resurrection, to learn about gentiles coming into the church? Maybe ten years.

Now, where were we 10 or 20 years ago? Perhaps we knew that Jesus was the Messiah. God had revealed that much to us. But we didn’t yet realize what sort of a Messiah Jesus really was. We had things to learn. At first, our vision was blurry. Blurry vision is a lot better than being blind — so much better that we may have thought we saw perfectly! Jesus asked us, “Do you see anything?” And we said, “Yes, Lord, we see!”

As many new Christians do, we thought we had all the answers, and we thought we could teach the world all mysteries. Well, we didn’t know what we didn’t know. We had a few things to learn, and first, we needed a willingness to learn. We had to ask, “Lord, anoint my eyes again. Help me see like you do.”

Much of what we first learned is true, but it wasn’t the complete picture. We might have thought it was enough — but now that God has revealed more to us, we can see it in better context.

In our Christian lives, we might be surprised at what we learn, but we should not be surprised that we learn. We are supposed to be learning, and there’s no way we can learn without admitting that our current understanding may not be complete.

We know in part, and we learn in part, a step at a time, and at each step our responsibility is to do the best we can with what has been revealed to us. Our responsibility now is not the same as it was ten years ago, because we now know more than we did then. We must go forward, a step at a time, as we are being led by Jesus Christ, as he opens our eyes and enables us to see.