Peter, the fisherman-disciple, embarked on a lifetime journey with Jesus Christ. We can do the same.

Their small fishing boat was being battered about in the stormy Sea of Galilee. Suddenly, out of the darkness emerged a shadowy figure. Incredibly, the phantom seemed to be — yes, it was — walking on the water toward them.

For a moment, the disciples were more frightened by this ghostly apparition than by the turbulent sea and their tossing boat (Matthew 14:22-33). But then the figure called out to them: “Take courage! It is I. Don’t be afraid.”

Still not convinced, Simon Peter shouted out, “Lord, if it’s you, tell me to come to you on the water.” Jesus invited Peter to come to him. Peter climbed out of the boat and — miraculously — began to walk on the water toward Jesus. 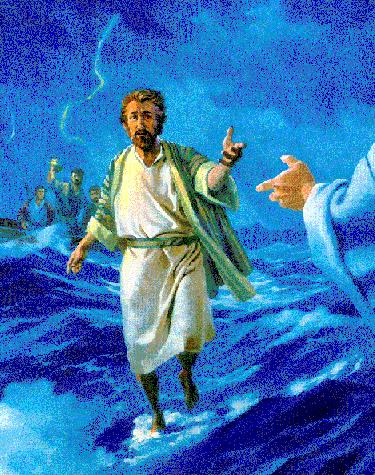 But Peter, feeling the wind beating against his body and the waves swirling about him, became afraid and started to sink into the cold, dark water. “Lord, save me!” Peter cried out, and Jesus reached out and caught his hand. Next thing he knew, they were both in the boat, and the wind had died down.

The disciples were stunned by the event, and by this man, Jesus. The Gospel of Matthew says, “Those who were in the boat worshiped him, saying, ‘Truly you are the Son of God’” (verse 33).

Peter and the other disciples had come face to face with Jesus as the One who saves. For a fleeting moment, they recognized something special about him — something they couldn’t explain.

Not long afterward, Jesus and his disciples came to Caesarea Philippi, were most of the residents were pagans. The city was north of the Sea of Galilee, at the base of Mt. Hermon. The city was filled with reminders of a pagan religious world. In such an unlikely place, Jesus Christ popped the question about his own identity (Matthew 16:13-20).

“Who do people say the Son of Man is?” he asked his disciples. They gave him the answers they had heard others give: Some thought Jesus was in the style of John the Baptist. Others viewed him more like Elijah, Jeremiah or one of the other biblical prophets.

More than a man

But something was missing in the people’s identification of Jesus. If he was merely the greatest of the great, he was still only another man. Jesus was looking for another answer. He asked his disciples, “Who do you say I am?” Peter, as usual, answered immediately, “You are the Christ, the Son of the living God.”

Jesus’ question to his disciples is the same question he poses to each of us: “You, what do you think of me?”

As Jesus told Peter, this is not knowledge we discover on our own. “Blessed are you,” Jesus said to Peter, “for this was not revealed to you by man, but by my Father in heaven.”

God had revealed to Peter who Jesus was — and God must do the same for us. We must have an internal experience of Jesus Christ, one that God makes possible by opening our understanding through the Holy Spirit. The biblical scholar and author William Barclay wrote, “Christianity never consists in knowing about Jesus; it always consists in knowing Jesus” (The Gospel of Matthew, Vol. 2, The Daily Study Bible Series, page 138).

To know Jesus Christ is to experience him, to believe in him and to follow him. By God’s grace, Christians are led to belief—belief that changes our lives.

Called to a New Life

In the New Testament, the idea of repentance is expressed by the Greek verb metanoeō, which includes the idea of changing one’s mind, one’s way of thinking. Repentance will often result in a change of behavior, but it begins in the mind, in the heart.

That change occurs in our relationship to the one, true God. It has to do with a turning away from a life in contradiction to God (that is, in sin), and a turning to him in faith. When we repent, God is accomplishing his will in our lives.

The church members in the Greek city of Thessalonica were commended by the apostle Paul because they had “turned to God from idols to serve the living and true God” (1 Thessalonians 1:9). Repentance has this “from” and “to” quality. When we repent, we go from an old way of life apart from God (sin) and take on a new life based on the Creator (in faith). To repent is to be turned around, so to speak, to be remolded and transformed. Believers in Christ become converted — they become new men and women of God.

Repentance is closely linked to faith — believing what God says and trusting in Christ as Savior. It means having one’s mind lifted from its concern with the “around” (the world) and the “within” (ourselves) to a faith based on the “above.”

Repentance-conversion-faith-belief are all aspects of the same spiritual quality of mind that God must give us. We cannot manufacture it of ourselves, apart from God’s calling. Our part is to respond to the urging of the Holy Spirit to accept this gift of God’s salvation. As Paul told the Ephesians, “it is by grace you have been saved, through faith — and this not from yourselves, it is the gift of God” (Ephesians 2:8).

After Jesus’ death and resurrection, the disciples, including Peter, were given the Holy Spirit. By an act of God’s grace, they received the gift of repentance and were converted (John 20:22; Acts 2:1-4). On that memorable Day of Pentecost, about seven weeks after Jesus’ death, Peter gave his first public sermon. He urged devout Jews to repent, become converted and receive the gift of the Holy Spirit (Acts 2:38).

But Peter spoke about repentance and conversion — a turning to God — in a surprising way. First, he did not tell his audience that they had to change their lives in terms of obeying the law of Moses more diligently and accurately.

The people listening to Peter were Jews who already worshiped God and obeyed the law (verse 5). Most of these devout Jews did not need to repent of what we commonly think of as corrupt, immoral behavior. They were what we might call good, church-going, religious folks. They weren’t flagrantly and habitually defiling the Sabbath, burning incense to idols or killing people.

In the context of repentance and conversion as “turning one’s life around,” what could these Jews have done differently? Externally, not much. But Peter’s directing them to repentance was an imperative, a command. It was a change of mind regarding Jesus, not a change in behavior. He asked them to enter into a new relationship with Jesus as their resurrected Savior. The context of Peter’s first public sermon makes his purpose clear. He began by pointing his hearers to Jesus Christ, whom he said they had rejected and their
leaders had killed (verses 22-23). This was the basis of their guilt and sin.

Throughout the sermon, Peter hammered away at one point: Jesus Christ is Lord and Savior, and people must put their faith in him. This turning to Jesus in faith was summarized as a simple charge to his hearers: “Repent and be baptized” (verse 38).

What they were to repent of was their rejection of Jesus as Messiah and Savior. Peter’s sermon explained repentance as a change of mind about Jesus — as an experience of him — as an acceptance of him as Savior. Peter called on his listeners to believe in Jesus Christ and to place total faith in him as their Savior.

The apostles and evangelists always pointed people to Jesus Christ and the resurrection. We can see this throughout the book of Acts, which is Luke’s story of the spread of the gospel of salvation. Apostles such as Peter encouraged people to understand Jesus as the One who saves. In this, they were following their Master himself, who spoke often of the need to follow him, to become Christlike.

To Jesus, “following” and “becoming” were the essence of repentance and the converted life. “If anyone would come after me, he must deny himself and take up his cross and follow me,” Jesus taught his disciples (Matthew 16:24).

People were to follow and trust Jesus at all costs. The choice of allegiance has always been between Jesus and everything that makes up our world. To make the right choice — to accept Jesus and crucify the self — was to repent.

Jesus’ summons to repentance and conversion is closely tied to his person. An individual’s decision to repent or not to repent is a choice for or against Jesus personally. When we are called to repent, we are not primarily confronted with changing a doctrine, a belief or cultural practice (although our commitment to Christ often leads to that as well). More importantly, we are faced with the living Christ himself. We are called to come to Christ and to allow him to transform our lives.

Some speak of conversion, coming to Christ or being “born again” as a one-time event. But Jesus did not call for merely a singular dramatic event. He asked for much more.

We can see this if we again look at the devout Jews who repented and became Christians in the first century. They had to accept an important reality: They needed to recognize that God had acted in history in Jesus. They were called to believe that the promise of grace and salvation made to their ancestors (among them Abraham and David) had been fulfilled in Jesus’ life, death and resurrection. God’s Messiah had come, and every knee was commanded to bow to him.

The person willing to acknowledge this as a life-changing fact is converted by God through the gift of the Holy Spirit. That person now has a new ongoing loyalty — an allegiance to the triune God, who in the person of Jesus Christ became our Savior.

Have you experienced a repentance and conversion in Christ? Have you come to Christ in faith? Have you accepted him as Lord and Savior? If not, Jesus bids you come and follow him. As he did in Paul’s day, God commands men and women everywhere to repent. His purpose is that all people come to a knowledge of the truth and repent.

If the enlightening power of the Holy Spirit has opened your eyes to see who Jesus Christ is — our Messiah and Savior — then you have already made a positive response to God’s offer of salvation. Now it may be worked out in your life.