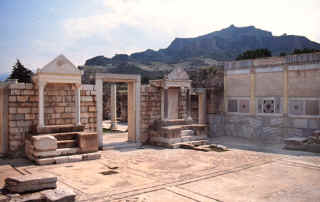 The church at Sardis was described as being “dead” (3:1). It appeared to be alive – had “a reputation of being alive” – looked spiritually vibrant on the outside – but was spiritually lifeless. The church was Christian in name only. This recalls Christ’s scathing rebuke of the Pharisees who “look beautiful on the outside but on the inside are full of dead men’s bones and everything unclean” (Matthew 23:27).

Says G.R. Beasley-Murray: “The appearance [of the Sardis church] is that of a beautifully adorned corpse in a funeral parlour, and the Lord is not deceived” (Revelation, p. 95). The church needed to stir up the living Spirit of God in order to come to life.

What was dead about the church and what needed reviving? First, there was no indication of persecution or trouble from outside forces. Neither was there any heresy within, in contrast to some of the other churches. Things seemed to be peaceful and religiously correct. Perhaps it was a church that was too good to be true. Its religiously proper appearance may have only meant that it had fully and silently compromised with the truth and the pagan society around it. G.B. Caird calls Sardis “the perfect model of inoffensive Christianity” (A Commentary on the Revelation of St. John the Divine, p. 48).

That might explain its calm and sedated outward appearance. George Eldon Ladd defined the Sardis church as “a picture of nominal Christianity, outwardly prosperous, busy with the externals of religious activity, but devoid of spiritual life and power” (A Commentary on the Revelation of John, p. 56).

Paul had described such Christians by saying they seemed quite religious but denied God’s power in their lives (2 Timothy 3:5). This community of the living dead needed the power of God to bring them back to life.

Christ therefore gave Sardis a jolting command to “Wake up!” (3:2). The rousing call was meant to encourage the church to take action. The members were to strengthen what little remained, to obey, to repent (3:2-3). Jesus told the church at Sardis to wake up or he would come like a thief does. “You will not know at what time I will come to you,” he said (2:3).

While most in the church at Sardis were in a dead spiritual state, “a few people” were faithful to Christ, and had “not soiled their clothes” (3:4). They were promised that they would be taken on a walk in Christ, and to be dressed in white (3:4-5).

White garments are mentioned on five other occasions in Revelation. The church at Laodicea needs them to hide their spiritual shame (3:18). The 24 elders wear white garments (4:4). The martyrs waiting for God’s judgment are given white robes to wear (6:11). The armies appearing with the Messiah also wear white and clean linen (19:14). The great multitude of the saved in Revelation 7 wear robes made white in the red blood of the Lamb (verse 14). The color paradox makes the point. It implies that the color white stands for God’s people made spiritually pure and justified by Jesus’ blood.

That means the few in Sardis who were given white robes had been made right and just before God. We should not lose sight of the fact that the robes are given to the Sardians as a gift, reflecting the fact that we do not justify ourselves by good works; we are made spiritually right by the work of Christ.

In the ancient world, white clothing also stood for festivity. Ecclesiastes counseled people to “be clothed in white” – to enjoy their food and drink with a joyful heart (9:8).Those clothed in white will feast at the marriage supper of the Lamb in the kingdom of God (19:9). It will be their day of victory, a time to put on the best of clothing, clean and white.

The righteous saints in Sardis were also promised that their names would appear in the book of life (3:5). Only those names entered in the Lamb’s book of life will be allowed into the New Jerusalem (21:27). The idea of a divine ledger is an Old Testament figure of speech for the Lord’s salvation (Exodus 32:32; Psalm 69:28). Daniel was told that at the end-time, “everyone whose name is found written in the book – will be delivered” (12:1).

It was also a common New Testament way to speak of salvation, of having a part in the kingdom of God. Jesus used the term (Luke 10:20), and so did Paul (Philippians 4:3). Hebrews speaks of “the church of the firstborn, whose names are written in heaven” (12:23). The entering of a person’s name in a book of life is another metaphor for salvation and eternal life.

The metaphor would have been familiar to the non-Jews in the Sardis church as well. Ancient cities in the Greek world kept registers of the names of their citizens. Criminals were removed from the civil register and lost their citizenship. Sardis, as the western capital of the earlier Persian and Seleucid empires, would have kept the royal archives for to a wide area.

Finally, Jesus promised to acknowledge the name of the overcomer in Sardis before his Father (3:6). This recalls Jesus’ promise as the incarnate Son of God: “Whoever acknowledges me before men, I will also acknowledge him before my Father in heaven” (Matthew 10:32).