An interview with Dr. Keith Baker, professor at Yale University and an experimental particle and nuclear physicist. He is a member of the experimental team working at the CERN Collider in Geneva, Switzerland.

Christian Odyssey: Would it be true to say that you are on the leading edge when it comes to experiments in this field?

Keith Baker: Yes. The most likely venue for new discoveries in all of science is at the Large Hadron Collider (LHC) at CERN. And that’s where I am. I’ve been working at the LHC for just over 15 years.

CO: What does the Hadron Collider do?

KB: The Large Hadron Collider is a proton-proton collider, that is, it collides hadrons. Briefly, hadrons are particles that have internal structure whereas the other class of particles—leptons—are structureless. For example, protons, neutrons, mesons are all examples of hadrons; they are made of quarks and gluons. Quarks and gluons are subject to the strong force and come together to form these hadrons. On the other hand, electrons, positrons, taus, and muons are examples of leptons. As far as we know, these have no structure and their interactions are not governed by the strong force, only the weak and electromagnetic forces. With circulating proton beams, higher energies can more easily be achieved than if leptons are collided. And the higher the collision energy, the deeper is our probe of space and time. That is, the greater our chance of discovery.

Using a stream of magnets, we send one beam of these protons one way and you send another beam of these protons the other way. Then, as they approach the speed of light, you make them collide at different points around the approximately 17-mile in circumference ring. We want to get to the highest energies we can, and make enough of these collisions so that these rare events that you’re looking for can take place in a reasonable amount of time. The magnets can focus these charged particles and we can make the collisions happen wherever we want. And of course, we can have millions of collisions every second. We then analyze the results. That’s the collider in a nutshell.

CO: Popular journalism has suggested you are looking for the “god particle.” However, scientists don’t like that term, do they? Why not?

KB: It implies that what we’re looking for will satisfy some deep religious question. But there’s no connection there. We are looking for evidence that will explain some important gaps in our scientific understanding—not theological.

All the stuff that you can see—the planets, stars, the galaxies, the clusters of galaxies—everything you can see is only a tiny percent of what makes up the actual universe. 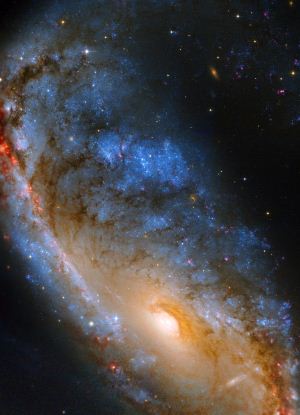 But there are problems with this Standard Model. It doesn’t explain the dark matter and dark energy, which are the most dominant constituents of our universe. We’ll come back to that later.

In the Standard Model all the particles are mass-less. That’s the only way the theorists who developed this Standard Model could make it work. But we know that particles do have mass. For example, a proton is heavier than an electron. A lambda hyperon is heavier than a proton. So we know that these things have mass, so what is it that gives them mass?

There could be any number of explanations, but the most likely one is what’s called Higgs field. It was named after Peter Higgs, a Scotsman. He theorized that there’s a field that interacts with particles that gives them mass. And so if there is a Higgs field, then there should be a particle—the Higgs boson. They called it the ”god particle” because it’s the only missing piece of this Standard Model. We have to discover it to explain how it is that particles have mass. It is a scientific question—not a religious one.

There are other ideas. For example, some have suggested there are extra dimensions. Our experience tells us that we live in a world that has three space dimensions plus time. But there could be other dimensions that exist. If they do, they’re probably small, and we just pass through them.

CO: You mentioned dark matter and dark energy. Can we talk about the implications of that?

KB: As I said, the Standard Model is a wonderful theory, but it is incomplete. There are lots of things that it doesn’t explain. About three quarters of the universe is made of what we call dark energy, but we have no idea what it is. We see the effect of it on stars and galaxies, but we haven’t been able to create it in the laboratory.

Dark energy is somehow making the universe accelerate as it expands. In what some call the ”Big Bang,” 13.7 billion years ago there was a rapid expansion of space. Until recently we assumed that this expansion would eventually stop and then come back in on itself. But the data now indicates that the universe is not only expanding, but it’s speeding up. It’s accelerating as it expands. We don’t know what gives rise to this accelerated expansion, so we just give it a name-dark energy. But this theory we have, the Standard Model, completely fails to explain it. We’re not even close.

And then there is dark matter. Cosmological and astrophysical data and data from astronomy indicate that nearly 30 percent of the universe is made of dark matter. We don’t know what it is. The Standard Model completely fails to explain that too. So all the stuff that you see—the stars, the galaxies, the clusters of galaxies and if there are black holes—all that is only a tiny sliver of the universe. The Standard Model explains roughly just four percent of the universe. It has to be incomplete because it doesn’t explain dark energy or dark matter, at least not as it is formulated right now.

CO: Do you have a problem reconciling this extraordinary experimental field that you work in with your belief in God?

KB: That has never been an issue. I see no incompatibility with being a scientist and being a Christian. I will say that there are times when I’ll look at the universe and just say “wow!” It is so delicately balanced. Some people have compared it to balancing a pencil on its tip on the table and having it remain balanced for 13.7 billion years. It could not have been a chaotic process. Something made this universe be as delicately balanced as it is and allow us to exist. This is pretty amazing, even at our level of understanding, and our understanding will increase over time, obviously.

CO: There have been some reports recently that you are on the verge of a breakthrough. What does this mean?

KB: Some people say this is the most exciting period in the history of our field or in many generations. All our experiments up until now indicate that there has to be some new phenomenon that happens when we collide protons together as we’re doing now. But we don’t know if that new phenomenon is going to be this Higgs mechanism, or extra dimensions, or super symmetric particles that pop out of the vacuum. And that’s what makes it exciting.

The recent news from CERN should be clarified. What is seen is tantalizing evidence that there might be a Standard Model Higgs boson in the vicinity of 125 GeV or so, but it is certainly not a discovery. We particle physicists refer to searches for new phenomena (such as the Higgs) in terms of the probability that what we observe is truly physics phenomena (five-sigma or greater) versus whether it could be a statistical fluctuation or some instrumental anomaly (less than five-sigma). Our experience guides us to make a five-sigma observation the threshold for calling what we see a real discovery. We have seen three-sigma effects come and go in our analysis. So while my advice to you at this point is don’t ”bet the farm” on these latest results signaling a new discovery, they are in my opinion tantalizing evidence of something new—a breakthrough. That is the reason for the media hype about a Higgs discovery. With more data and more analysis, we can make a strong statement one way or another. In any case, 2012 will be an exciting year if the LHC runs as well as it has in 2011!

What we understand now just may be a small piece of something that’s much bigger. And for me, being a part of this adventure is why I went into physics in the first place!