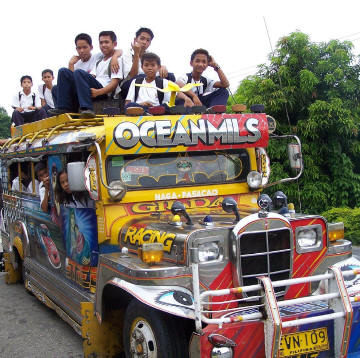 “We aren’t coming for a vacation—we are coming to serve. We don’t want to be a burden—we want to do something that helps,” we explained to the Philippines office personnel. So they put us to work, and we were able to see God at work in a dozen ways, in a dozen places. Join us for the highlights of our two-week “mission immersion” trip in the Philippines.

Did they really mean it?

Our first eye-opening experience came in a small city southeast of Manila. A church leader there had arranged a Christian music concert and evangelistic presentation for 400 students at a local university. 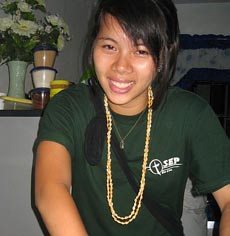 The local church teen band led with several upbeat worship songs. I gave a brief testimony about how I learned my need for Jesus when I was attending a university. We introduced ourselves, and offered to answer questions. To our surprise, they didn’t ask about America—they asked about faith. Our teens gave answers.

Another church band played, we did two skits, and two of our teens gave short talks. Our band played several songs. Rey Taniajura, a Filipino minister, spoke, and asked people to raise their hands if they wanted to accept Jesus as Lord and Savior.

They all raised their hands.

“This must be a cultural thing,” I thought. “They raised their hands because they saw other people doing it.”

“If you accept Jesus as your Savior, then follow me in this prayer, one phrase at a time,” Pastor Rey said.

They all stood, and all prayed out loud.

“This would never happen at an American university,” I thought. “Did they really mean it?”

One of the teachers told the assembly: “I was born a Catholic and I was married a Catholic. I am still a Catholic, but I’m not so sure any more. I have never seen anything like this in my church.” At least he thought the response had been genuine. Then he asked, “Do you want to have an event like this again?”

They all shouted out, “Yes.”

A response that immediate must be genuine, I thought. This is what I needed to hear. The local leaders are now working to help these young people grow in the faith.

From there we went to Masbate Island. After a boat ride, a bumpy bus trip, a short trip in an outrigger boat and a short hike, we arrived at Balawing, where Lando, a missionary from Mindanao, is helping start a new church. Since fishing is the primary occupation here, the church is named “Christ’s Fishers of Men.” They meet in a bamboo building with a dirt floor. Our mission was to help them cover the floor with concrete.

We mixed the concrete on the dirt floor: Time after time, six bags of sand, one bag of cement, two bags of rocks, and water hauled in five-gallon jugs from a stream 150 yards away. It was hard work, but we had enough people helping that we could take turns.

But the floor was only part of our ministry in Balawing. We brought used clothing and various supplies with us to give to believers and their friends. They had more friends than we had supplies! Since most of the adults work during the day, we had church meetings at night. 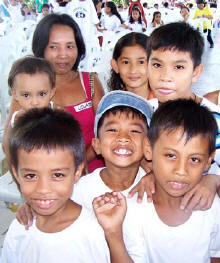 Day and night, there were dozens of children. They played tag with our teens. We taught them “Duck, duck, goose,” and they taught us how to sing “Father Abraham” the Filipino way. My wife, Janet, shared the gospel as she made balloon animals for them, and someone translated for her.

It’s difficult to go to school in this remote area, so the people don’t know English well. We couldn’t do much direct evangelism, but we showed Jesus’ love by what we did. Just being there said a lot—Americans don’t visit Balawing very often. Nobody does.

There are other villages nearby. Pastor Lando thinks that the next investment for the church might need to be a small, motorized boat, so he can go to them. It could be used to bring some basic medical instruction to the villagers, too.

“Now I have life”

On the way back to Manila, we stopped near Iriga City, at a small church among the Aeta tribe, remnants of the original inhabitants of these islands. We distributed some used clothing, vitamins, soap and toothpaste that we had brought. Janet made balloon animals for the children, and we spoke briefly to the adults.

The next day, we drove several hours through a low mountain range to the east coast town of Infanta. About two years ago, a typhoon caused floods and mudslides that killed several hundred people and destroyed many homes in Infanta. Our denomination did not have any members in the area, but they were involved in the initial relief efforts, bringing food, clothing, and other supplies. 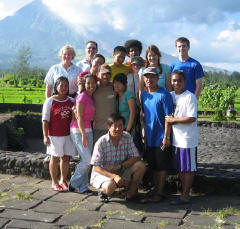 After the immediate needs were taken care of and relief agencies moved to other areas, the church continued to visit the area and meet with the people. There were Bible studies for high school students; the teachers asked for Bible studies, too.

We had been invited to speak in the high school. (Unlike America, it is permissible to advocate religious ideas in Filipino schools.) About 200 students listened as our teens spoke. Janet presented the gospel, emphasizing that we are saved by grace, not by our works. She asked how many wanted to accept what Jesus had done for them.

Many of them raised their hands.

There is much work to do in Infanta. There are many who want to know more about Jesus Christ. Our traveling pastor visits them once a week, but we need to train local leaders, too, so the gospel can flourish and spread.

As we gathered in a community center where our church meets, we asked the people about their experiences in the flood. Many were traumatized. Many are still afraid of rain. But they can praise God because the tragedy brought the gospel to them, and made them willing to listen. Using a word-play in Filipino, one woman said, “I lost my bahay [house], but now I have buhay [life].” 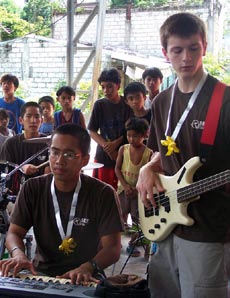 A few days later, we went to Bulacan, north of Manila, where the government resettles squatters who live in shantytowns in Manila. It is a poor area. About 800 people gathered in an open-air shelter for the evangelistic crusade. Crusades work well in poor areas, I was told later, but not very well in the cities. There are too many other things to do in the city.

In the mall in Manila, we were ignored. Here, we were celebrities. “Are you a rock star?” the kids asked Abel, our drummer, as he set up the equipment. The mayor spoke. Teens from the local church performed a dance. Our teens presented a skit showing Jesus taking our sorrows, making salvation available to all. They played several songs.

I gave a brief message, then asked if they wanted to accept Jesus as Savior and Lord. Again, the vast majority had a positive response. “I did not do that,” I thought. “I spoke for 10 minutes, and God gave the harvest. All I did was shake a tree full of ripe fruit.” 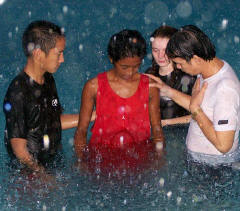 Unfortunately, we had to leave right away, because we had an appointment to baptize people who had been counseled by the local pastor. We had five teams of people in the water, going through the brief baptism ceremony. Other teams stood nearby, praying for the people after they were baptized.

They arrived busload after busload—a steady stream of mostly young people. It began to rain. It poured. We were wet anyway, so we continued. There were 263 baptisms—a harvest we did not plant, but a harvest that God allowed us to participate in.

There is much growth in this area. They need Bibles. We need to identify and train local leaders. A local seminary will train the leaders for free, if we will pay for the books. It won’t cost much, but it’s more than the local church has. 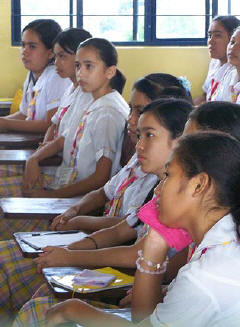 Church in a dump

On our last day of ministry, we went to a small preschool, which a member started for people who are too poor to send their children anywhere else. While we painted the outside, Janet shared the love of Jesus with animal balloons, and the girls played “Duck, duck, goose.”

Then we went to Payatas. Many of the people here make their living by finding things to recycle in the city dump. The high school principal let us speak in two classrooms—part of the values education curriculum. Each of our teens spoke about a value. Janet spoke about the gospel. All the students accepted Christ.

“Come, all you who are thirsty,” says Isaiah 55:1. “Come to the waters; and you who have no money, come, buy and eat! Come, buy wine and milk without money and without cost.”

He has words for the rich, too: “Why spend money on what is not bread, and your labor on what does not satisfy? Listen, listen to me, and eat what is good, and your soul will delight in the richest of fare” (verse 2). How sad it is that the poor will listen, but often the rich will not. They have houses, but do not have life.

At a day-care facility in the area, we helped feed the children. We gave them rice with a small amount of chicken—probably the most nutritious meal they had that day. Sometimes the program is funded well enough to feed the children every day, but sometimes it is not.

In the Great Commission, Jesus told his disciples to preach the gospel and teach the people who respond (Matthew 28:19-20). This is a ministry of the word. There is also a ministry of work—of doing physical service that helps others. When we give people food, clothing and other assistance, we may be doing it to Jesus himself (Matthew 25:35-40). This is not “bait” to get people to listen—we help them because they need help, whether or not they respond to the gospel.

“Love your neighbor as yourself,” said Jesus to an expert in the Jewish law (Luke 10:27). “And who is my neighbor?” he asked Jesus (verse 29). Jesus basically said that everyone is—we should have mercy on people who need help (verses 30-37). Some missions focus on the word; others on work; we had some of each.

The time came for us to return to America. Here in the land of plenty, people need the gospel, too. This is where God has placed us. When Jesus gave the Great Commission (Matthew 28:19-20), he didn’t tell his disciples to start at the ends of the earth. He told them to start in their own neighborhoods. For them, it was Jerusalem and Judea. For us, it is Southern California. Where is it for you?

You can go to some other nation and see God at work. You can also see God at work in your own neighborhood. He may work in different ways, and the harvest may be smaller, but it is still his work. Are you willing to let him work through you?