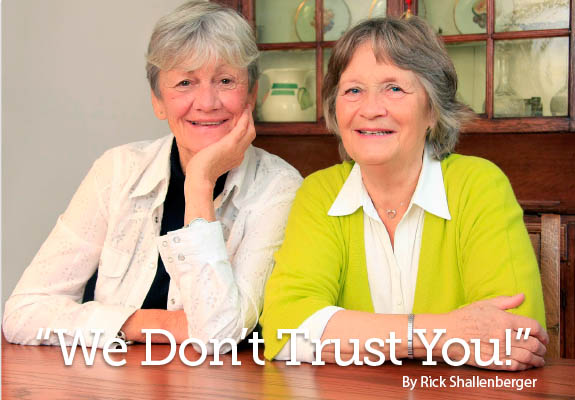 Hi Pastor Rick, welcome to our church. We wanted to say we liked your sermon, and we don’t want you to take this wrong, but we want you to know from the start that we don’t trust you.”

Now I admit these were not the first words I expected to hear from the two women who approached me after my first sermon in their congregation. How was I supposed to take that statement? Before I could respond with more than a smile and an “OK,” they continued. “It’s not anything you’ve done or said or anything we’ve heard about you, it’s because of what other ministers have done and said. We just want to be honest and tell you it’s going to take a while before we trust you.”

I have to admit, while I was a bit taken aback, I appreciated their honesty. Upon reflection, I have to say they were among the most honest and heart-felt words I’d heard in some time. I told them I completely understood and believed they would grow to trust me. If they didn’t, I told them, then it was likely going to be more my problem than theirs. From their response, I knew I was going to get along with those two women and I did. Over the years, we became close and they did grow to trust me.

I didn’t always feel this way. When I was young I always thought pastor was synonymous with power. You get ordained as a pastor and immediately people look up to you, respect you, listen to you and follow you. OK, stop laughing please—naiveté is one of the curses of youth. Perhaps that’s one of the reasons God chose to wait to ordain me until I was almost 40. His wisdom always prevails.

By the time I became a pastor, I had learned that power is not synonymous with pastor. Love certainly is. Tenderness is. The ability to listen is. And when I practiced these traits, respect followed. I learned respect as well as trust is earned, not given. I wish more Christians could learn this lesson. We aren’t trusted because we claim to be Christian; we are trusted when we act like  Christ followers; when we follow the example of Jesus. The Creator of the universe came among the creation (we call this incarnation) and he never once demanded respect. Instead, he loved. People came to him because of his example—not because he displayed power, but because he displayed compassion. He came as a shepherd to gather his sheep, not as a king to rule over subjects. He taught by example. Is it any wonder Paul told us to follow him as he follows Christ (1 Corinthians 11:1)?

Being a pastor or Christ follower is not about getting trust, respect, power or anything else—it is about giving of the self to others. It’s about leading others in love to the One who loves them just as they are. The psalmist said it’s about following our shepherd who lovingly leads us to green pastures and to still waters where we can drink and eat in peace. We are invited to join Jesus as he leads others to that same pasture and calm stream. Being a follower of Christ is about building relationships, which will lead to earned trust and earned respect, which leads to opportunities to teach.

I believe all Christ followers can look at the scriptural qualifications for elders and see how to be good Christians. “If anyone wants to provide leadership in the church, good! But there are preconditions: A leader must be well-thought-of, committed to his wife, cool and collected, accessible, and hospitable. He must know what he’s talking about” (1 Timothy 3:1-2, The Message throughout).

Then in Titus we read: “It’s important that a church leader, responsible for the affairs in God’s house, be looked up to—not pushy, not short-tempered, not a drunk, not a bully, not money-hungry. He must welcome people, be helpful, wise, fair, reverent, have a good grip on himself, and have a good grip on the Message, knowing how to use the truth to either spur people on in knowledge or stop them in their tracks if they oppose it” (Titus 1:7-9).

Notice the focus? A Christian should be one who is looked up to because he (or she) welcomes people. She is “well-thought-of” because of her behavior. In other words, a Christian knows how he or she lives, and love speaks volumes more than being able to quote the Bible or what title he or she has.

One of the qualities we look for in a ministry leader is what we call a shepherd’s heart—someone who looks after the needs of others and is more concerned for them than for the self. True Christ followers have this same heart. And when they do, they don’t have to ask for or demand respect, because it naturally comes as a result of how they live. Christians become trusted and respected when we, over time, demonstrate we are much more concerned about people than our personal doctrines, titles or denominational ties.