The book of Acts shows a dramatic change in the disciples. No more questions, no more doubts, no more arguing among themselves. They boldly preached with confidence to thousands of people in the temple, defying the religious leaders, risking their lives because they were so zealous for the message.

What turned the fishermen into faith-filled preachers? Two things: they were convinced that Jesus was alive, and that they were given the same power that Jesus had—the Holy Spirit helped them understand and gave them courage. 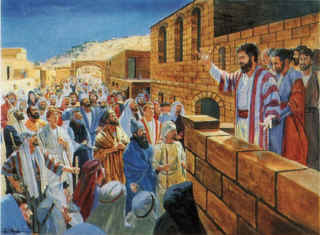 The Messiah was alive, and his message was true: The time had come. The kingdom of God had come! Turn to God, and believe the wonderful news!

Jesus told them to preach, and so they preached!

But what did they preach?

On the day of Pentecost, strange sounds came from heaven. Strange things appeared near the disciples. Strange words came from their mouths. Jews from all across the empire asked, What is going on? Peter stood up to explain what was happening: A prophecy of Joel was being fulfilled (Acts 2:1-20).

A prophecy of Jesus was being fulfilled, too. He had predicted that the Holy Spirit would come upon his disciples, and it was happening. The Holy Spirit had filled Peter, and he preached with power.

What did he say? He preached about Jesus:

Listen to what I have to say. Jesus of Nazareth, a man attested to you by God with deeds of power, wonders, and signs that God did through him among you, as you yourselves know—this man, handed over to you according to the definite plan and foreknowledge of God, you crucified and killed by the hands of those outside the law. But God raised him up, having freed him from death. (verses 22-24, NRSV)

Peter continued to preach about Jesus, and concluded his sermon by saying, “Therefore let the entire house of Israel know with certainty that God has made him both Lord and Messiah, this Jesus whom you crucified” (verse 36). He told the people to repent, and they would know that their sins were forgiven (verse 38).

The disciples did not completely forget about the kingdom of God. It is mentioned a few times, but the overwhelming focus of their messages was Jesus. The most important thing people needed to know about the kingdom is Jesus, specifically that he is the Messiah (or in Greek, the Christ), that he has come, and he has been resurrected to life.

The kingdom in Acts

Evangelism is a major theme of the book of Acts, but the word kingdom is not used in any of the sermons. It is used only eight times in Acts. We’ll see what the disciples said about the kingdom.

Although Jews believed in the kingdom of God and had the Old Testament prophecies about it, Paul argued about the kingdom for three months in the Ephesian synagogue (Acts 19:8). His concept of the kingdom must have been considerably different from what the Ephesian Jews had believed.

No wonder! Paul’s message about the kingdom was coupled with a message about Jesus and grace and faith. The overwhelming focus of the apostolic messages was Jesus. The most important thing people needed to know is about Jesus.

That was Jesus’ message, too. For 40 days after his resurrection, he taught the disciples about the kingdom (Acts 1:3). What did this include? Luke tells us what he talked about during that time. On the road to Emmaus, “he interpreted to them the things about himself in all the scriptures” (Luke 24:27). Later, he summarized his own message: “These are my words that I spoke to you while I was still with you—that everything written about me in the law of Moses, the prophets and the psalms must be fulfilled” (verse 44).

What was written? Here it is in a nutshell: “The Messiah is to suffer and to rise from the dead on the third day, and that repentance and forgiveness of sins is to be proclaimed in his name to all nations, beginning from Jerusalem” (verses 46-47). This is the kingdom message: a message about the Messiah who suffers, dies, is resurrected, calls for repentance and brings forgiveness.

Throughout the book of Acts, we see the disciples preaching about Jesus, about his resurrection, about repentance, faith and salvation. Many people accepted the message. Others  scoffed, and some became angry. People react in different ways to Jesus.

But wait! How did a message about the kingdom of God get turned into a message about the messenger? Did the disciples get it wrong? Absolutely not! They were inspired to understand what Jesus was teaching. Jesus had spoken in figurative language; he inspired them to take the next step. They were also inspired to write the books of the New Testament—and the first four are all about Jesus. Jesus is the focus of the Gospels, of Acts, of the Epistles, and of Revelation. He is the focus of the message of the church.

Jesus speaks about himself

Jesus made some astonishing claims about himself—so bold that the Jewish leaders hated him for it. They could tolerate talk about the kingdom, perhaps, but they were really upset when Jesus talked about himself.

Jesus preached about himself, and it made people angry. He made sure that his disciples knew who he was (Matthew 16:13-17), and he promised them heavenly rewards (verse 19). He said that devotion to himself was more important than life itself (verses 25-27). He claimed that he would return with the glory of God (verse 27). He gave enormous authority to his disciples,
which means that he himself had even greater authority (18:18). He claims to have all authority, and to have power everywhere (verse 20; 28:18).

Jesus claimed that his life would ransom everyone else (Matthew 20:28), as if he were worth more than everyone else put together. He claimed that his blood would institute a new covenant between God and humans (26:28). He quoted a psalm about God as if it applied to himself (21:16). He claimed to have the power to send angels throughout the world (24:31). He said his words were infallible and eternal (verse 35).

The Jewish leaders thought that these claims were blasphemous. They understood how astonishingly great Jesus claimed to be. The validity of the message that he preached depended on who he was. If what he said was true, he was God. They could not accept it.

We find similar teachings in the Gospels of Mark and Luke: Jesus said he was someone incredibly important, the focal point of prophecy, the key to everyone’s eternity. We cannot enter the kingdom of God unless we accept Jesus as the King. We cannot have one without the other. The good news about the kingdom is that Jesus himself has arrived.

In his actions and in his words, Jesus showed that God accepted people into his kingdom. He forgave them, he welcomed them, he invited them. It was good news for sinners. Jesus did not come to invite the “good” people—he came to invite the sinners. They are the ones who know they need help.

But people who thought that they could work their way into the kingdom did not like the message. Their concept of religion was totally opposed to the way that Jesus taught. Wasn’t religion a way to keep people in line? Wasn’t the threat of punishment necessary for a law-abiding society? Jesus was upsetting the way the world worked.

Jesus was a blasphemer, they thought. He was treating the law of Moses far too casually. He must be one of the false prophets that Moses said should be killed (Deuteronomy 13:1-5). They felt justified, no doubt, in arranging for his death. It was better for one man to be killed than to plunge the whole nation into a war with Rome (John 11:49). That was the choice they thought they had: kill a blasphemer, or risk Roman retaliation. The choice was obvious.

Although they didn’t know it, this was part of God’s plan for the kingdom. The Messiah had to die, to give his life as a ransom, to atone for their sins, to bring forgiveness, to make the kingdom good news of salvation instead of bad news of punishment. For the people to be saved, one man did have to die.

What a man this was! The man sent by God to be the Lamb of salvation (John 1:29), so that all who believe in him are children of God, born of God (verses 12-13). We are children of the King—through believing in Jesus Christ.

We will perceive the kingdom as good only if we are in it—and as part of his good news, Jesus talked about how people get in. That’s the most important thing we need to know about it. God will take care of where it is and when it is and what it will be like. We might like to know those things, but we don’t have to know them. What we need to know is how we can be part of it.

So he told them how.

“The tax collectors and the prostitutes are going into the kingdom of God ahead of you,” Jesus told the priests and elders (Matthew 21:31). How were they going in? By believing Jesus’ words about righteousness and repentance (verse 32) and by doing what God wants (verses 28-31). People enter the kingdom by repenting and believing the gospel.

Jesus did not preach much about the details of the future kingdom. Rather, he preached about the way citizens of his kingdom can live and think in this age. He told us how our sins are forgiven. He told us to repent and believe the gospel. His disciples preached the same (Luke 9:6; Mark 6:12).

The kingdom of God is here, Jesus said. It begins right now.  In the future the kingdom will have great glory—God will see to that. There will be fabulous future rewards, but the question that Jesus brings is, Are we willing to be in the kingdom right now?

Some Pharisees asked Jesus when the kingdom would come (Luke 17:20). He replied that the kingdom already existed in their midst (verse 21). But they could not yet see it. The kingdom will eventually be seen by everyone, but the King had to suffer and die first (verses 22-25).

Jesus also told the Pharisees, “If it is by the Spirit of God that I cast out demons, then the kingdom of God has come to you” (Matthew 12:28, Luke 11:20). The kingdom is here, he said, and the proof is in the power. The kingdom of God is demonstrating its authority over Satan’s rule—and this proof continues in the church today. Just as the kingdom could be seen in the ministry of Jesus, it is seen in the ministry of his church, too. Jesus predicted that his followers would do even greater works than he did (John 14:12). The kingdom is growing.

The kingdom of God is here, Jesus said. People did not need to wait for a conquering Messiah God is already ruling, and we turn our hearts toward him now. The kingdom announcement demands a decision. It is a call to action. We do not need to wait—there are things to be done right now.

The good news about the kingdom is not just that it is near—it is that we can be part of it. Nearness is not good news if we miss out! Our sins would disqualify us, but in Jesus our sins are forgiven. We can believe in Jesus and turn toward God. We can be in the kingdom of God forever, and that is wonderfully good news!