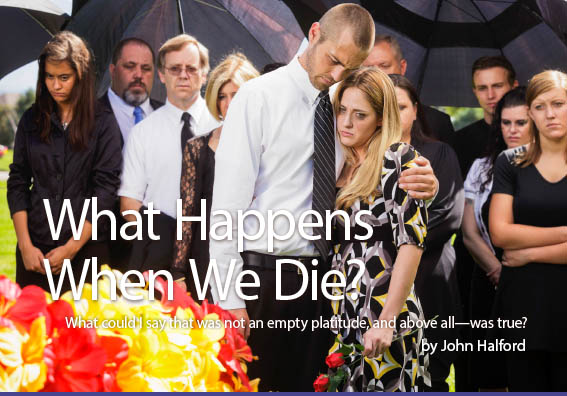 A funeral is never easy, but this one was going to be particularly difficult. Janet seemed to be a successful, attractive person with a lively sense of humor. Then her life fell apart.

Her husband abandoned her in a messy divorce. Her real estate business collapsed. Then she learned that she had terminal cancer. It was too much. One day she pinned a note to her garage door, saying, “I am in here. But call the emergency services first.” Then she took a shotgun and killed herself. The family, stunned and trying to make sense of Janet’s death, had her cremated, as Janet wanted, but they also wanted a funeral. They asked me to officiate.

The funeral was well attended and represented all parts of the religious spectrum with many different ideas about Janet. Some were convinced she was in heaven with Jesus. Others believed she was asleep, awaiting the resurrection. Some likely believed she was in purgatory (but surely not for long, as she was a devout and sincere Christian). A few were convinced that since Janet had taken her own life, God had sent her straight to hell. So who was right? Or were they all wrong? What, precisely, has God told us happens to us when we die?

Death is a frontier, and it is one we rightly fear to even approach, let alone cross. It is, as Paul wrote, an enemy (1 Corinthians 15:26), and we hold it at bay as long as possible. But eventually it conquers us all. Then what? Most people have some kind of belief that death is not the end. So what could I say at this funeral that was not just an empty platitude, but was true?

The answer is not what you might expect. God has not told us precisely what happens immediately after we die. He has told us that, in and because of Jesus, we have victory over death. Jesus assured us that he is anxious for us to join him to experience life in a way that we mortals cannot begin to imagine, and his promise is that this new life will last forever. But beyond that, the Bible is frustratingly vague about the details. Especially the details of what happens immediately after we die. Note the emphasis on “immediately.”

Some scriptures suggest that the dead are safely “asleep,” and so, we can surmise, they will know nothing until the moment of resurrection when Jesus returns (1 Corinthians 15:6; 1 Thessalonians 4:14). But others imply that they are in some way conscious and experience emotions.

Paul had no fear of physical death. He had, at some time in his eventful life, been given a “visitor’s pass” view of heaven, transforming his worldview. Life “here below” had become difficult, and he was eager to begin the next stage. So he wrote to the Philippians, “As long as I’m alive in this body, there is good work for me to do. If I had to choose right now, I hardly know which I’d choose. Hard choice! The desire to break camp here and be with Christ is powerful. Some days I can think of nothing better” (Philippians 1:22-23, The Message).

But what did he mean by “be with Christ?” He does not elaborate.

John, the author of Revelation, also talks about “seeing” heaven. “I saw under the altar the souls of those who had been slain because of the word of God and the testimony they had maintained. They called out in a loud voice, ‘How long, Sovereign Lord, holy and true, until you judge the inhabitants of the earth and avenge our blood?’ Then each of them was given a white robe, and they were told to wait a little longer, until the number of their fellow servants and brothers who were to be killed, as they had been, was completed” (Revelation 6:9-11).

Further complicating the issue is Jesus’ own words. Just before he died, he asked the Father to receive his spirit (Luke 23:46). Shortly before that, he made a promise to the repentant thief suffering crucifixion beside him. This man believed that, after death, good people go to “paradise.” Although he had not been a good man, he realized that Jesus had, so he begged him to remember him in whatever came next.

So you see, the Bible does not really give us a specific, unambiguous answer to the question of what happens to us immediately after we die. It does however make it clear that death is a cutoff point. One phase of your existence is finished; another is about to begin. It is as if God is saying, “Don’t worry about it. Leave it to me. I have things under control.”

What Scripture does emphasize is what theologian N.T. Wright has called “the life after life after death,” in a new heavens and a new earth. All our clues for this life come from Jesus.

When Jesus died on the cross, the Father received his spirit, but three days later, Jesus was resurrected and then later ascended.

He was resurrected with a body. A real, recognizable body, with genuine body parts—not a wispy, ethereal manifestation that could be made to look like a body when he wanted to make himself visible. This spiritual body was a new life form—a permanent, everlasting version of what he had been before—a human being made immortal. No longer bound by the limitations of time and space, Jesus could move back and forth from within the dimensions we experience to those that are beyond our reach, although not necessarily beyond our imagination.

The Bible also tells us that what happened to Jesus will also happen to us. “Now we are children of God, and what we will be has not yet been made known. But we know that when he appears, we shall be like him, for we shall see him as he is” (1 John 3:2). But it’s not just a matter of “seeing” him—as glorious as that may be. Revelation 21 speaks of us living with God—of having fellowship him; that is the purpose for which we have been made and the purpose for which we have been given salvation. We will live with the Triune God in never-ending love, joy, and peace. We are given exceedingly great and precious promises, Paul says, and God will do more for us that we can even think to ask or imagine.

This, then, is the Bible’s focus when it speaks of life after death: Jesus himself is the new and living way (Hebrews 10:20).

Our new life will certainly be a rest from anxiety, feelings of guilt and the limitations of our frail bodies. But, more, it will be filled with activity and experiences—all you could possibly want in this life—and much, much, more. Eternity will not be spent in a sort of nebulous nether world, utterly alien to everything we have experienced and everything we enjoy. “No eye has seen, no ear has heard, no mind has conceived what God has prepared for those who love him,” wrote Paul to the Corinthians. He added, “but God has revealed it to us by his Spirit” (1 Corinthians 2:9-10 NIV 1984).

Right now we only have a few tantalizing glimpses. We can get foretastes of it when we experience the wonderful things about being alive now. Human love, hard-won accomplishment, deep friendships and acts of genuine unselfishness—those moments when we think, “I wish life were always like this” give us “flash forwards” to another kind of existence. It is the way we were meant to live, the way the world could be—and will be one day. They encourage us to join Jesus Christ in hoping and waiting for it with, as Paul said, “joyful anticipation.”

So, could it be that the joyful anticipation continues in some way immediately after our physical death? Although we should not be dogmatic, there is enough in the Scriptures to show this is a strong possibility.

This is what was going through my mind as I pondered what to say at Janet’s funeral. We were saying goodbye to a loved one, but I believe God was saying, “Hello. Welcome—not to your eternal rest—but to the rest of eternity.”

When she took her life, Janet confronted her last enemy. She will never meet another one. Her days of pain and despair are over. Whatever her current state, her future is secure in the arms of a loving God. This is what those who loved her needed to know.

I walked out into the chapel, faced the audience and said, “In this little urn is all that is left of Janet that God does not want.”

Then I told them the rest of the truth.