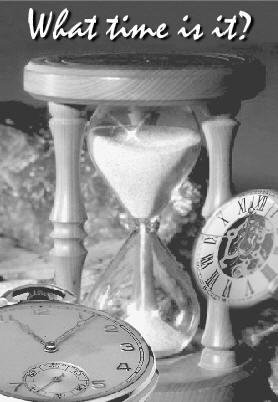 How many times a day do we ask the question, “What time is it?”

Sounds like a simple enough matter until we take the time to think about it. Then we realize it isn’t so simple at all.

Consider this: Before the 1800s, time-keeping was a local event. In Medieval Europe the town clockmaker was the key man. He would set official time geared to whenever the sun reached its zenith each day. This was hardly precise. When we advanced to pocket watches, people traveling between cities often had to adjust their clock, literally, from time to time.

Then came the railways in the 1800s. Because of scheduling issues, concern over freight rates and critical delivery of perishables, time issues became much more crucial. In 1878, a Canadian, Sandford Fleming, became a national hero by dividing the world into the 24 time zones we use today.

So, the United States has nine time zones spanning from Maine to Guam, and we are all familiar with Pacific, Mountain, Central and Eastern time. The former Soviet Union had 12 time zones! Even today, all of giant, sprawling Russia is on permanent Daylight Savings Time, and each region is an hour ahead of the actual time on record.

It took the Standard Time Act of 1918 for the U.S. Congress to make our four time zones mandatory. Otherwise the wheels of commerce would quickly grind to a halt. Time is even more important to God, and the biblical approach to time is a little more delightfully complicated than it at first seems.

Richard Kromer aptly summarized the biblical approach to time: “History has a beginning in God, it has its center in Christ and its end in the final consummation and the Last Judgment.”

Right. The Bible has a lot of respect for time. God is working out his purposes across time. On the other hand, God is not strictly bound by time, either.

Looked at one way, time is a created entity. One day is the amount of time the earth rotates on its axis. One year is the measurement of its orbit around the sun. But it is different on Mars or Venus. Thus time, in this sense, is a material, relative entity. But this is only one way of reckoning time.

In the Greek New Testament many words allude to time. One is chronos, from which we get our word chronology. This is the kind of time we are familiar with—the ticking of the clock, the realm of time and space we all inhabit.

The Bible pays attention to this linear way of measuring. “Teach us to number our days aright,” sang Moses, “that we may gain a heart of wisdom” (Psalm 90:12). And Jesus asked: “Are there not twelve hours of daylight?” (John 11:9).

But another altogether different word for time is also used in the New Testament. That word is kairos. (One more, ainos, refers to duration, butkairos will be our focus in this article.)

Kairos is the “fullness of time,” God’s time zone. Kairos time conveys notions of unboundness, of fluidity, of God’s purposes intersecting and overruling this finite world of chronological time. Kairos thus refers to opportunity, as Carl Henry writes in The Evangelical Dictionary of Theology.It represents “the arena of man’s decision on his way to an eternal destiny” (page 1096).

Kairos thus conveys a more exciting concept than simple chronos. Kairos refers to specially selected periods of divine determination. It operates within profane human time but mainly as the focus of the fulfillment of God’s ultimate purposes.

When Jesus came the first time it was a definite kairos moment—a time of fulfillment, a time of judgment and a time for God’s promises to become operative (Mark 1:15; 2 Corinthians 1:20).

Note this from the book of Titus: “Paul, a servant of God and an apostle of Jesus Christ for the faith of God’s elect … which God, who does not lie, promised before the beginning of time [Greek chronon from “chronos”] and at his appointed season [kairos] he brought his word to light” (Titus 1:1-3).

God created time, and in his sovereign kairos time he interacts and enters into chronos time according to his perfect will. This is one reason life with God is so exciting—we are not predetermined, the future is open to us and we are open to it.

New Testament writers related kairos to two cardinal events. These were times of repentance and times of God’s choosing to accomplish his mighty purpose. Once again, kairos refers to decisive turning points within the larger sweep of chronological time.

This concept of decisive moments has its roots in Old Testament thought. In the book of Daniel, the prophet appealed to vain King Nebuchadnezzar to get busy changing his ways right now to avoid future punishment (Daniel 4:27).

This sense of a divine turning point—”now is the time, now is the hour”—is central to kairos time. It helps us understand Paul’s earnest appeal to the wise men of Athens: “In the past God overlooked such ignorance, but now he commands all people everywhere to repent” (Acts 17:30). That “but now” is kairos time.

Germans speak of Der Tag—a specially appointed time calling for decision. In World War Two we had June 6, 1944, D-Day, a chronological date on the calendar but also much, much more. D-Day conveys urgency, importance, a call for momentous things to occur.

In that connection, note Carl Henry’s words: “While the New Testament gives prominent scope to the future … its central kairos is the life and death and resurrection of the incarnate Christ, which is decisively significant for the kingdom of God. The terms, ‘day [of the Lord]’ and ‘hour,’ ‘now’ and ‘today’ gain dramatic significance in the New Testament context whenever the eternal order impinges upon the sweep of ordinary events” (EDT, page 1095).

Thus kairos helps clarify another theme of Scripture, the fact that in the view of biblical writers the end time had already begun with the appearance and ministry of our Lord Jesus Christ.

Notice Hebrews 1:1-2, “In the past God spoke to our forefathers through the prophets at many times and in various ways, but in these last days he has spoken unto us by his Son, whom he appointed heir of all things.”

Now consider the implications of what we have been saying. Here are four.

First, in God’s divine time schedule where kairos intersects kronos, the decisive moment has already come. Jesus has already appeared bringing salvation and healing to all who will accept him “Today”!

This was the inspired Peter’s plea that momentous Day of Pentecost: “Save yourselves from this corrupt generation” (Acts 2:40). Or as Paul put it: “Now he commands all people everywhere to repent. For he has set a day when he will judge the world with justice by this man he has appointed” (Acts 17:30-31).

How true! The commission to the Christian church is to point people to that central kairos event already manifested: the sacrifice of Christ on our behalf. Accepting that ransom made for us means we enter kairos time here and now, already, and thus secure a better future.

A second point is to remind us why so many prophetic time schemes and prophecy charts based on chronological reckonings of the 1260 days, the 2520 days or even the three days and nights (Matthew 12:40) break down. These schemes are rooted only in chronological time, whereas kairos time can be any time God chooses.

When the Ninevites repented, God intervened and changed the future. Once again kairos intersected with chronos just as it did for those 3,000 converts who heard Peter’s sermon (Acts 2:41).

Yet you and I know of people who try to predetermine and preempt God’s sovereign freedom by choosing a date on a calendar when God has to intervene—maybe 1844 or 1917 or 1975 or 2000. How futile to try to pin down our Sovereign God that way!

Third, Israel lived mainly in chronos time as evidenced by the sabbaths, festivals, set feasts and appointed times and seasons (Leviticus 23). The Hebrew calendar was lunar-solar, rooted to this world, this physical time and space system. But the gospel proclaims this thrilling truth—”if anyone is in Christ, he is a new creation; the old has gone, the new has come” (2 Corinthians 5:17).

The Christ-event changed everything. Radically. Christians celebrate their faith in kairos time regardless of the day of the week or a date on the calendar. This is the force of Acts 2:47, speaking of the early church: “Every day they continued to meet together in the temple courts. They broke bread in their homes and ate together with glad and sincere hearts.”

Fourth, all authentic Christians live in two time zones—the temporal and the eternal. Eternity is one of those grand intangibles such as love and devotion, a can’t-see-it, can’t-touch-it concept that nevertheless looms large in the Christian life, especially as we near the end of our individual journeys.

“Now there is in store for me the crown of righteousness,” Paul testified, “which the Lord, the righteous Judge, will award to me on that day—and not only to me, but also to all who have longed for his appearing” (2 Timothy 4:8). Paul is speaking here of kairos time over chronos time, one reason Christians were not to know the day or hour of their Lord’s appearing (Acts 1:7).

So, what time is it?

Time to call men and women to repentance, time for us all to turn more devotedly to God and accept that the center of history lies in the past in a kairos moment called Calvary. And by so doing we help affect eternity.