A hundred years ago, many Bible critics claimed that stories of the patriarchs were nothing more than religious fiction. The “silence of history” concerning the patriarchs, upon which these critics based their claims, was shattered with the discovery of ancient tablets at Mari (in southeast Syria) and Nuzi (in modern-day Iraq).

These tablets, although not directly mentioning the patriarchs, still constituted such valuable testimony about their life-styles that the late Professor William F. Albright (the then-acknowledged “dean” of Palestinian archaeologists) concluded that “the narratives of Genesis dealing with Abram may now be integrated into the life and history of the time [the second millennium B.C.] in such surprisingly consistent ways that there can be little doubt about their substantial historicity” (Biblical Archaeologist, July 1973, p. 10). Professor Albright’s conclusion was based on the following evidence from the Mari and Nuzi tablets:

Overall, the patriarchs’ way of life conforms so closely to the cultural world described by these tablets that there is no reason to doubt that they were real people. 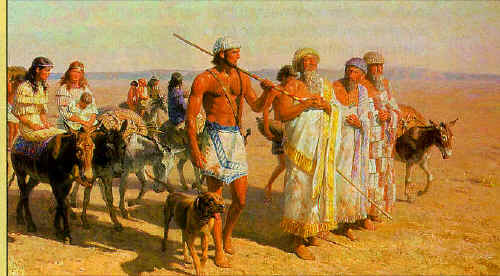 The patriarchs’ wanderings stretched from Mesopotamia to Egypt (above). Trekking westward (top), Terah leads his clan up the Euphrates Valley, destined for Haran. A younger Abram (with staff on shoulder) takes his place beside his father and other family elders.