As a boy I heard the story of Abraham recounted at least once a week, and it usually went something like this: “God told Abraham to go, and he went. He didn’t ask questions; he didn’t hesitate; he just packed up and left everything he knew—country, family—and went. That’s how all of us should obey God. When God says ‘jump,’ you don’t ask ‘how high?’ you just jump.” 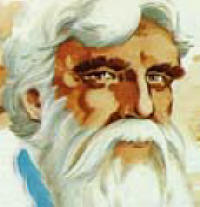 The background for the story above comes not from the Genesis account of Abram’s call, but from Hebrews 11, commonly called the “faith chapter.” Verse 8 reads: “By faith Abraham obeyed when he was called to go out to the place which he would receive as an inheritance. And he went out, not knowing where he was going” (NKJV). Verse 11 adds, “By faith Sarah herself also received strength to conceive seed, and she bore a child when she was past the age, because she judged Him faithful who had promised.”

You might at first think that the author of Hebrews was reading the Classics Illustrated version of the Abraham story, because the Genesis version paints a somewhat different picture—a not-so-sanitized picture of the patriarch and matriarch of the chosen people.

The early record, found in Genesis 11:27-32, is sketchy: Abram was the son of Terah; his wife’s name was Sarai and she was barren; Terah moved Abram and Sarai, along with his grandson, Lot, to Haran; Terah died. (There is no mention of the rest of the family moving to Haran.)

Somewhere along the line (we are not told when), God spoke to Abram, giving him a most remarkable promise. The Lord said to Abram, “Go forth from your country, and from your relatives and from your father’s house, to the land which I will show you; and I will make you a great nation, and I will bless you, and make your name great; and so you shall be a blessing; and I will bless those who bless you, and the one who curses you I will curse. And in you all the families of the earth shall be blessed” (Genesis 12:1-3).

God told Abram to “go forth from your country.” What was Abram’s country? Haran seems to have been only a temporary home for Abram, not a place that would qualify as “your country.” Since Ur is called the native land of Abram’s brother Haran (11:28), it would seem that Ur would have been “your country” and the location of Abram’s “father’s house.”

If that is true, then it would seem more likely that Yahweh said these things to Abram while Abram was still in Ur—while he was still with his relatives and in his home country. If so, it becomes clear that Abram may have been rather slow about getting “out of your country, from your relatives and from your father’s house.”

In that case, it would make one wonder whether Terah moved Abram, Sarai and Lot from Ur in response to what Yahweh had told Abram. (The passage in Genesis refers to no one else moving.) After all, Terah took Abram and headed to the land of Canaan (Genesis 11:31), but stopped short in Haran. Was he trying to light a fire under Abram by getting him started?

Whether it was immediately or later, at some point after God’s call, Abram did pack up all his considerable possessions, including slaves (12:5), and traveled from Haran across the Euphrates River and down to Canaan, leaving his father’s house and whatever relatives might have also made the trip from Ur to Haran.

Abram had barely set up shop in the “land of promise” before there was a famine so bad that he packed up and moved to Egypt. One has to wonder: if Abram trusted God’s promise about the land flowing with milk and honey, why go straight to Egypt when there was trouble? After all, in 13:10, we find that the plain of Jordan was lush and “well watered everywhere.” Why didn’t Abram go there, part of the promised land, instead of Egypt? We aren’t told.

What we are told is that Abram’s stay in Egypt was on the shady side. Fearing that the king would kill him in order to marry his beautiful wife, Abram asked Sarai to tell the king that she was his sister. As expected, the Egyptians saw how beautiful Sarai was and told the king. So he took her, believing she was Abram’s sister, and treated Abram well for her sake, apparently giving him plenty of riches in the form of stock. But God plagued the king because of it. When the king found out Sarai was the cause of the plagues, he was less than happy with Abram’s deception and deported him, but let him keep all those gifts.

There are several things to consider here. One is that Abram handled his affairs a lot like many of us tend to: Seek the most expedient way out of a problem, that is, shortsighted, knee-jerk, unplanned living. What about faith? Abram didn’t show much in this episode. But there is another side to the story.

In this incident, Abram was weak in faith. But here’s the kicker: Consider what God did in spite of Abram’s lack of faith. He blessed Abram with more stock. He protected Sarai, in spite of Abram’s willingness to let the king take her. He got Abram back into the promised land, though it took a deportation to do it. Who knows how long Abram would have stayed in Egypt otherwise?

What is the lesson? God is faithful, even when we are not. That’s a pretty big lesson, and it only gets stronger as we move through the Genesis stories. We begin to get the impression that these stories are not here to give us models of excellent living, but to show us God’s faithfulness to those who call on his name.

Rest of the story

When we read Genesis, the facts are stacked against Abram. But it is often the case that the obvious, simple facts don’t tell the whole story. There is often something going on under the surface, behind the scenes, that plain facts don’t have the capacity to convey.

From your own experience, you know that “just the facts” doesn’t always convey the real story. Sometimes the facts give a false impression, because they don’t contain the deeper facts, the invisible facts—the heart, the motivation, the mitigating circumstances, the personal journey.

In Mark Twain’s story of Tom Sawyer, the facts were against Muff Potter. He was holding the bloody knife, he was drunk, there was a witness against him, and worst of all, he remembered nothing, so even he believed he must be guilty—from the facts. But the simple, obvious facts conveyed an untrue story. There were deeper facts, unseen facts, which told the true story and spoke louder than the simple, obvious facts.

It’s easy to say Abram was weak in faith. But consider this from Abram’s perspective: God spoke to Abram, giving him some of the most dramatic, famous and far-reaching promises in the Bible. In spite of such unprecedented special treatment from God, Abram’s life was far from a bed of roses. For example, where was God when the so-called promised land of blessing and descendants was a parched, cropless wasteland with no kids bearing Abram’s name, when in desperation Abram decided he had to head down to Egypt so he could feed his wife, slaves and animals?

Where was God when Sarai’s desperation over her barrenness drove her to offer her servant Hagar to Abram to give him a child, or when Abraham had to contend with Sarah’s bitter jealousy toward Hagar and Ishmael? Where was God when Abraham’s love for Ishmael was brushed aside as irrelevant when it was time for Isaac to come along? What were the big promises worth to Abraham when he had to struggle with water rights, when he had to go to war to rescue his kidnapped nephew, when he had to send Ishmael away with nothing but the bread and water he and his mother could carry, and most of all when he was trudging along beside a donkey toward Mount Moriah like some worshiper of Molech to make a burned sacrifice of Isaac?

Abraham had to deal with strife, pain, heartache, tragedy and grievous disappointment, just like you and me. And through it all, he kept trusting God to be faithful to his word of grace and promise.

Sometimes Abraham put things off. Sometimes he tried to solve things himself (he did the tell-them-you’re-my-sister thing again the very year Isaac was born). Sometimes he acted unwisely. But it was in the middle of the pains, problems, frustrations and mess-ups of life that Abraham trusted God, not in some happily-ever-after fairy tale land where heroes are practically-perfect-in-every-way and nothing serious ever goes wrong.

And God was faithful to Abraham, just as he is faithful to us—not faithful to do the kind of things we think a proper God should do, like giving us whatever we long for or think we need—but faithful to us—to his redemptive purpose for us, to his new creation of which he has made us part in Christ.

The Hebrews version is the real story: the “rest of the story.” Hebrews gives us God’s redemption of Abraham’s story, the true meaning that God gave Abraham’s story in Christ.

In the same way, God has redeemed your story—your personal history, the record of your weaknesses, shortcomings and failures, and has transformed you and your history into something new—his new creation in Jesus Christ. In Christ, we can put our troubled past behind us, and trust his word of truth for us. As Paul put it, “Therefore, if anyone is in Christ, he is a new creation; old things have passed away; behold, all things have become new” (2 Corinthian 5:17, NIV).