“Hail, thou that art highly favoured, the Lord is with thee: blessed art thou among women” (Luke 1:28, King James Version). How many times have we heard these familiar words of the archangel Gabriel repeated, especially every year around the time of Christmas. You may have repeated these Old English words yourself as a child, dressed in a white robe with wobbly angel wings and a lopsided halo as you portrayed Gabriel in a nativity play. 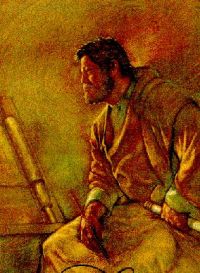 Did you know that the biblical story of Gabriel’s announcement to Mary that God had chosen her to be the mother of the Messiah is recorded only in the Gospel of Luke?

Without the inspired writings of Luke, we would also not know about the miraculous conception of Elizabeth, mother of John the Baptist; the story of the prophetess Anna; the virgin Mary’s song of praise: the story of the woman anointing Jesus’ feet with her tears and costly oil; and of the women disciples, along with men, who accompanied Jesus in his travels and helped support his ministry.

What a legacy the third evangelist has left Christians. Luke has a special interest in women. Only he tells us of the prominence of women in Christ’s ministry. As Ben Witherington III writes: “It is Elizabeth and Mary, not Zechariah and Joseph, who are first to receive the message of Christ’s coming, who are praised and blessed by God’s angels, and who are first to sing and prophesy about the Christ child. Luke presents these women not only as Witnesses to the events surrounding the births of John and Jesus, but also as active participants in God’s Messianic purposes” (Women in the Earliest Churches, page 134).

Of course, Luke was no feminist. His purpose was to show how God had turned society upside down. The rich and complacent were rejected by God while the poor and repentant were accepted.

“Luke’s portrayal of Mary is emblematic of how God reverses the poverty and powerlessness of the human condition. And throughout his narrative, Luke pays particular and positive attention to the role of women. The theme of reversal is expressed as well by the inclusion within the people of God of Samaritans and Gentiles” (Luke Timothy Johnson,The Gospel of Luke, Sacra Pagina Series, page 22).

Apparently, Luke was the only New Testament writer who was a gentile. According to Paul, he was a physician by profession and seems to have been in contact with Paul during Paul’s last years in prison (Colossians 4:14).

No doubt Luke used his friendship with Paul as a primary resource as he prepared to write Acts, his account of the first decades of the New Testament church.

God inspired Luke the historian to include in his works stories of women that were not a part of the other New Testament writings. For how could we otherwise know how prominent women were in the early church without Luke telling us of the faith of women, of the healing of women, of women’s role as disciples, of women’s part in the birth, death and resurrection of Jesus Christ?

Women in discipleship is particularly emphasized by Luke. He not only reports about the female followers of Jesus Christ, but specifically names them.

“After this, Jesus traveled about from one town and village to another, proclaiming the good news of the kingdom of God. The Twelve were with him, and also some women who had been cured of evil spirits and diseases: Mary (called Magdalene) from whom seven demons had come out; Joanna the wife of Cuza, the manager of Herod’s household; Susanna; and many others. These women were helping to support them out of their own means” (Luke 8:1-3). 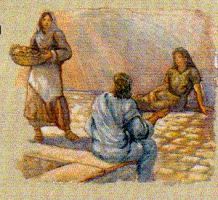 In Luke’s story of Mary and Martha, he records Christ’s emphasis on women putting their spiritual responsibilities ahead of their physical ones.

Jesus and his disciples were visiting the home of Martha and Mary in Bethany, a small town about two miles east of Jerusalem. With such a large group to feed, Martha was understandably concerned that the preparations for the meal were successfully completed.

You can imagine the scene. Here Martha was rushing about, trying to do several things at once to prepare to feed this large group of people in her home. Her sister Mary, in the meantime, sat with the men listening to Christ talk, oblivious to or perhaps ignoring Martha’s frustrated glances her way.

Martha’s next action shows how close this family was to Jesus. Martha openly complained that her sister, Mary, was not helping her prepare the meal. Please tell her to help me, Martha said to Christ.

Instead, Jesus Christ gently rebuked her: “`Martha, Martha,’ the Lord answered, `you are worried and upset about many things, but only one thing is needed. Mary has chosen what is better, and it will not be taken away from her'” (Luke 10:41-42). Those are surprising words in a culture where women’s primary task was to take care of domestic concerns rather than study God’s Word.

The importance of spiritual concerns, of having a relationship with God is emphasized again in Luke’s report of a woman calling out to Jesus: “`Blessed is the mother who gave you birth and nursed you.’ He replied, `Blessed rather are those who hear the word of God and obey it'” (Luke 11:27-28).

Women in the book of Acts

Although women are not depicted as often in Luke’s book of Acts as in his Gospel account, in Luke’s portrayal of the theme of the last becoming first and the first becoming last is the example of the seven men chosen to distribute food to the gentile widows.

Witherington comments on this story from Acts 6:1-7: “Stephen and Philip, both prominent preachers and teachers of the Word, are among the seven chosen to supervise the food distribution to the widows. Thus, leading men are chosen for a task that normally a male servant would fulfill in a [Judean] Jewish setting, or a woman would fulfill in a Hellenistic or Roman setting. In the eyes of the Hellenists, for a prominent man to fulfill such a task would be demeaning and a reversal of roles with a man doing a woman’s or servant’s work” (Women and the Genesis of Christianity, page 212).

Luke showed by this and many other examples that service to others was not to be looked down on and delegated as “woman’s work,” but was an integral part of being a Christian for both men and women.

In Acts, Luke goes on to tell us that a woman was Paul’s first convert in Europe. In the remarkable story of the Macedonian woman Lydia, Luke shows Paul beginning a local church with women converts.

But before we read Luke’s story, notice in Acts 16:9-10 that while in Troas Paul has a vision of a man of Macedonia begging him to come there to help the Macedonians.

The apostle Paul concludes that God has called him to preach the gospel to the Macedonians and sets sail for that region. Imagine Paul’s surprise when his “man of Macedonia” turns out to be a woman!

Paul no doubt raised an eyebrow when he found only a group of women to speak to when he first arrived in Macedonia. “On the Sabbath we went outside the city gate to the river, where we expected to find a place of prayer. We sat down and began to speak to the women who had gathered there.”

Luke continues: “One of those listening was a woman named Lydia, a dealer in purple cloth from the city of Thyatira, who was a worshiper of God. The Lord opened her heart to respond to Paul’s message” (Acts 16:13-14). Luke goes on then in the same chapter to tell of the conversion of a man, Paul’s jailer (verses 29-34).

“Luke’s intention is once again to convey a certain male-female parallelism in order to stress the equality of man and woman in God’s plan of salvation, and their equal importance to the new community” (Witherington, Women and the Genesis of Christianity, page 215).

All Christians have a new relationship with God. Through Christ, we — both male and female — have become God’s own children and one in Jesus Christ.

“You are all sons of God through faith in Christ Jesus, for all of you who were baptized into Christ have clothed yourselves with Christ. There is neither Jew nor Greek, slave nor free, male nor female, for you are all one in Christ Jesus” (Galatians 3:26-28).

Christ is calling all to repentance and a new way of life. Those of you who are women, Jesus Christ calls you equal in his sight, and heirs to all of his promises. And, as you humbly follow him, Christ will use you in his service.

Let’s thank God for caring for women so much that he inspired Luke to record these accounts of Christian women in the New Testament. What a legacy he has left us, and what a responsibility.

See also a companion article: The Prominence of Women in the Book of Luke