On the evening he was betrayed, Jesus “poured water into a basin and began to wash his disciples’ feet, drying them with the towel that was wrapped around him” (John 13:5). 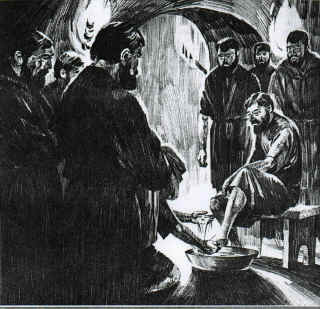 “When he had finished washing their feet, he put on his clothes and returned to his place. ‘Do you understand what I have done for you?’ he asked them…. ‘Now that I, your Lord and Teacher, have washed your feet, you also should wash one another’s feet’” (verses 12, 14).

In the days of dusty roads and open-toed sandals, feet often became dirty, and it was the job of the lowest servants to wash the guests’ feet. But Jesus set an example of service by doing this job himself, despite the protests from Peter.

What did Jesus teach?

Jesus said, “I have set you an example that you should do as I have done for you” (verse 15). We must ask, then, just what did Jesus do?

Christians generally skip most of what Jesus did. We do not wash feet during a meal, take off our suit jackets or wrap towels around our waists. We do not pour water into a basin, or dry feet with our own towel. Most Christians do not literally wash one another’s feet. Some churches have an annual footwashing service, but if they do, people usually wash two feet that are already clean. Jesus washed 24 feet that really needed to be washed. Jesus performed a service that really needed to be done.

Did our Lord instruct his disciples to “wash one another’s feet” (verse 14)? Yes. Then why don’t we have any evidence that the apostles actually did it? They didn’t do it the evening Jesus commanded it, and we see nothing about it in Matthew, Mark, Luke, Acts, the epistles or in early church history.

The closest thing we find to it in the New Testament is 1 Timothy 5:10, which is about the qualifications of widows who may be put on a list of widows working for and supported by the church (we don’t do that anymore, do we?). One of the qualifications is that she must be “well known for her good deeds, such as…washing the feet of the saints.” Here, footwashing is a notable act of service, not something that all Christian women are expected to do on an annual basis.

Apparently the apostles understood Jesus to be talking about real service, not a ritual. When Jesus said, wash one another’s feet, he meant, serve one another. He used a specific example as a figure of speech representing all types of service. (The Gospel of John has many such figures of speech that should not be taken literally.) Jesus is saying that we should humble ourselves and be willing to do even menial tasks for one another.

It is not wrong for Christians to wash one another’s feet. But we do not turn the figure of speech into a literal requirement.

The Bible was written in a specific culture, and its instructions are sometimes phrased with specific customs. Paul tells us to greet one another with a holy kiss, and footwashing is even more tied to culture than kissing is. It is based on foot travel, dusty roads and open-toed sandals. In Jesus’ day, footwashing was a normal part of a formal banquet. Now it is not. It is no longer part of customary formality, and it is no longer viewed as an honor or service.

When we serve one another throughout the year, helping one another with real needs, we are obeying the spirit of the law of Christ. We are “washing feet” when we give people rides to church, when we help them move furniture, when we bring a meal for the sick, when we clean house for the bereaved. We wash feet when we encourage the depressed, are patient with the angry, spend time with the lonely.

There are a thousand ways to “wash the feet of the saints.” Sometimes it might even involve washing their feet — even cutting their toenails and helping them with cleanliness. Real service for genuine needs is far more important than a sanitized ritual. As Paul wrote: “You, my brothers, were called to be free. But do not use your freedom to indulge the sinful nature; rather, serve one another in love” (Galatians 5:13).