Matthew 9, like most other chapters in Matthew, tells of several events in the life of Christ. But these are not random reports—Matthew sometimes puts stories next to each other because they shed light on each other. They give physical examples of spiritual truths. In chapter 9, Matthew tells several stories that are also found in Mark and Luke—but Matthew’s version is much shorter, more to the point. 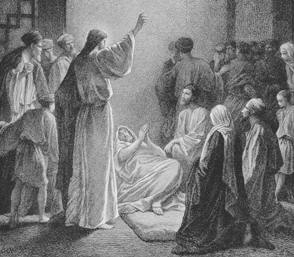 When Jesus returned to Capernaum, “some men brought to him a paralyzed man, lying on a mat. When Jesus saw their faith, he said to the man, ‘Take heart, son; your sins are forgiven.’” (verses 1-2; NIV 2011 used in this chapter). In faith, they brought this man to Jesus to be healed, and instead of healing him, Jesus simply said that his sins were forgiven. The man’s most serious problem was not his paralysis—it was his sins—and Jesus took care of that first.

But some of the teachers of the law were thinking, “This fellow is blaspheming!” (v. 3). Only God can forgive sin, they thought, so Jesus is claiming too much for himself.

Jesus knew what they were thinking, scolded them for their evil thoughts, and challenged them: “Which is easier: to say, ‘Your sins are forgiven,’ or to say, ‘Get up and walk’? But I want you to know that the Son of Man has authority on earth to forgive sins. So he said to the paralyzed man, ‘Get up, take your mat and go home.’ Then the man got up and went home” (vv. 5-7).

It is easy to talk about divine forgiveness, but it is hard to prove that it has really happened. So Jesus performed a miracle of healing in order to show that he had authority to forgive sins. His mission on earth was not to heal everyone’s physical diseases, and he didn’t even heal everyone in Judea. Rather, his mission was to announce forgiveness—and that he was the source of forgiveness. This miracle was designed not to announce physical healings, but to announce something more important: spiritual healing.

“When the crowd saw this…they praised God” (v. 8)—but not everyone was happy.

After this incident, Jesus “saw a man named Matthew sitting at the tax collector’s booth. ‘Follow me,’ he told him, and Matthew got up and followed him” (v. 9). The fact that Matthew had a “booth” suggests that he collected taxes from people transporting goods through the area—perhaps even from fishermen taking their catch into town to sell. He was a customs agent, a toll-road cashier, and a Roman-appointed highway robber. But he left his lucrative job to follow Jesus, and the first thing he did was invite Jesus to a banquet with his friends.

“While Jesus was having dinner at Matthew’s house, many tax collectors and ‘sinners’ came and ate with him and his disciples” (v. 10). It would be like a pastor going to a party at a Mafia mansion.

The Pharisees noticed the kind of company that Jesus kept, but they did not challenge him directly. Instead, they asked his disciples, “Why does your teacher eat with tax collectors and ‘sinners’?” (v. 11). The disciples may have been a little puzzled themselves, and eventually Jesus gave the answer: “It is not the healthy who need a doctor, but the sick. But go and learn what this means: ‘I desire mercy, not sacrifice’ [Hosea 6:6]. For I have not come to call the righteous, but sinners” (v. 12). He had authority to forgive – this was a spiritual healing, too.

Just as a doctor associates with the sick, Jesus associated with sinners because those are the sort of people he came to help. (Everyone is a sinner, but that isn’t the point that Jesus is making here.) He called people to be holy, but he didn’t require them to be perfect before he called them.

The new and the old

The Pharisees were not the only ones who were puzzled by the ministry of Jesus. The disciples of John the Baptist asked this question: “How is it that we and the Pharisees fast, but your disciples do not fast?” (v. 14). They fasted because they were sorry that the nation had strayed so far from God.

Jesus replied: “How can the guests of the bridegroom mourn while he is with them? The time will come when the bridegroom will be taken from them; then they will fast” (v. 15). There is no need to mourn while I am here, he said—but he hinted that he would eventually be “taken”—removed by force—and then his disciples would mourn and fast.

Jesus then gave a puzzling proverb: “No one sews a patch of unshrunk cloth on an old garment, for the patch will pull away from the garment, making the tear worse. Neither do people pour new wine into old wineskins. If they do, the skins will burst, the wine will run out and the wineskins will be ruined. No, they pour new wine into new wineskins, and both are preserved” (vv. 16-17).

Jesus did not come to “patch” the Pharisee approach to pleasing God. He was not trying to add mercy to the sacrifices that the Pharisees taught, nor was he trying to pour new ideas into an old framework. Rather, he was starting all over, bringing something new. We call it the new covenant.

Raising the dead, healing the unclean

Matthew then connects another story to this one by telling us: “While he was saying this, a synagogue leader came and knelt before him and said, ‘My daughter has just died. But come and put your hand on her, and she will live’” (v. 18). Here is an unusual religious leader—one who had faith in Jesus. Jesus went and raised the girl from the dead (v. 25), but while he was on the way, someone else came to him for healing:

“Just then a woman who had been subject to bleeding for twelve years came up behind him and touched the edge of his cloak. She said to herself, ‘If I only touch his cloak, I will be healed.’ Jesus turned and saw her. ‘Take heart, daughter,’ he said, ‘your faith has healed you.’ And the woman was healed at that moment” (vv. 20-22).

The woman was unclean because of the bleeding. The Law of Moses said that people should not touch her. Jesus had a new approach. Instead of avoiding her, he healed her when she touched him. Matthew highlights the reason: faith.

Faith is what prompted men to bring a paralyzed friend. Faith is what motivated Matthew to leave his job. Faith brought a religious leader to seek life for a dead daughter, a woman to seek healing for continual bleeding, and blind men to seek for sight (v. 29). All sorts of ailments, but one source of healing: Jesus.

The spiritual significance is clear: Jesus forgives sin, gives new life and new direction in life. He makes us clean and helps us see. This new wine is not poured into the old framework of Moses—it creates its own framework. The ministry of Jesus is built around the mission of mercy.