Some scholars think the Gospels attribute sayings to Jesus he never made.
The Gospel writers denied that they put their own ideas on Jesus’ lips. Who is right? 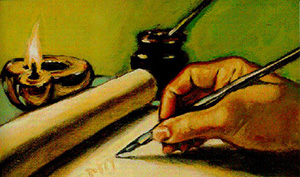 In the 1990s, a group of scholars called the Jesus Seminar created headline news, especially in the United States. To put it simply, they questioned whether the Bible is the inspired word of God.

The seminar was composed of specialists in the New Testament Gospels. They taught at leading universities and seminaries in North America and represented every major Christian denomination and tradition. The Jesus Seminar staked out a heady goal for itself. It hoped to recover the actual words Jesus spoke, uncover what he really thought and discover which deeds recorded in the Bible he accomplished.

At its spring 1991 meeting, the Jesus Seminar concluded its first phase—six years of debating and voting on the words of Jesus. In that autumn, the seminar began its second phase, analyzing the biblical accounts of Jesus’ life and deeds.

During their quest to discover the true voice of Jesus, the seminar rejected about 80 percent of his words, calling them later creations. The discarded words of Jesus included statements:

The seminar believes most of Jesus’ statements and teachings as reported in the Gospels are inaccurate. The Gospels are called “gilded portraits” of Jesus. This premise, the seminar points out in its Gospel of Mark, is “shared by all critical scholars of whatever theological persuasion.”

Did the Gospel writers create their own fake Jesus narratives and statements, or did they faithfully preserve his teaching? The question is of more than casual academic interest. If the Gospel writers perpetrated a theological hoax, their Gospels would not be “gospel truth.” How could they be the word of a God who does not lie? (Titus 1:2).

Suppose, as the seminar maintains, the Gospel writers created Jesus’ sayings. Let us say for argument’s sake the seminar has discovered the almost inaudible voice of the true “historical Jesus” amidst the cacophony of purported faked conversations and bogus narratives in the Gospels.

What are the consequences to us of a Jesus who had no concept of dying for humanity’s sins; did not found his church; did not think of himself as divine? On what basis can the Christian hope of the resurrection and salvation be established?

Consider the implication of just one seminar claim—that Jesus did not announce his return to set up the kingdom of God on earth. If this claim were true, it would put the Christian hope in serious jeopardy. The Bible links the resurrection of the dead and salvation with Jesus’ return (see Matthew 24:29-31; 1 Corinthians 15:51-52; 1 Thessalonians 4:13-17).

“There is a price one pays” for considering the Gospels as purely human products, admits Dr. Borg. The consequence is that “there are no divinely guaranteed formulations of truth.” According to Dr. Borg, “The Gospels are seen as the developing tradition of the early Christian community” and “reflect the viewpoints of their authors” and “the Christian communities for which they spoke.”

The Gospel writers, however, repudiate these notions. They claim to have accurately portrayed Jesus’ life and teaching.

The writer of the Gospel of John claims he was an eyewitness of all the teachings and circumstances of Jesus’ life that he writes about. He maintains his Gospel is a true account of Jesus’ thoughts and words.

John was there when Jesus spoke and worked; he knew Jesus personally. In a letter to the church, John wrote of this Jesus “which we have heard, which we have seen with our eyes, which we have looked upon, and our hands have handled” (1 John 1:1).

John, in this same epistle, when speaking of Jesus, insists that he and the others “have seen, and bear witness, and declare to you that eternal life which was with the Father and was manifested to us” (verse 2). John maintained that he wrote a true testimony of Jesus’ words and works: “That which we have seen and heard we declare to you” (verse 3).

As a teenager, Mark may even have seen and heard Jesus. The Gospel of Mark refers to “a certain young man” who followed the arrested Christ and then fled (Mark 14:51-52). Many scholars think that this story, which plays no role in the Gospel and is not found in any other Gospel, is a cryptic reference to the author.

Mark clearly had access to Jesus’ teachings through these important eyewitnesses when writing his Gospel. For this reason, we can have confidence in what Mark reported of Jesus’ words, teachings and life.

The Gospel of Mark was written by an individual who may have been only a partial witness to Jesus’ life and teachings. Should this invalidate his Gospel account? Mark was intimately associated with the apostles and eyewitnesses. He was the cousin of Barnabas, a co-worker with Paul (Colossians 4:10) and is further identified as John Mark in Acts 12:12.

Robert H. Stein, professor of New Testament at Bethel Theological Seminary, points out that Mark “lived in Jerusalem and his home was a center of the early church.” Because of this, “He was no doubt privy to much eyewitness testimony,” writes Dr. Stein.

The Bible tells us Mark was closely associated with the apostle Paul in preaching the gospel message (Acts 12:25; 13:5; 15:36-39). Mark is called a fellow laborer with Paul (Philemon 24). At the end of his life, Paul instructs Timothy: “Get Mark and bring him with you, for he is useful to me for ministry” (2 Timothy 4:11). As well, a close relationship existed between the apostle Peter and Mark, evidenced by Peter’s reference to him as “my son” (1 Peter 5:13).