They went across the lake to the region of the Gerasenes. When Jesus got out of the boat, a man with an impure spirit came from the tombs to meet him. This man lived in the tombs, and no one could bind him anymore, not even with a chain. For he had often been chained hand and foot, but he tore the chains apart and broke the irons on his feet. No one was strong enough to subdue him. Night and day among the tombs and in the hills he would cry out and cut himself with stones. 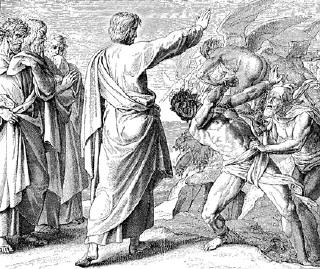 When he saw Jesus from a distance, he ran and fell on his knees in front of him. He shouted at the top of his voice, “What do you want with me, Jesus, Son of the Most High God? In God’s name don’t torture me!” For Jesus had said to him, “Come out of this man, you impure spirit!”

Then Jesus asked him, “What is your name?”

“My name is Legion,” he replied, “for we are many.” And he begged Jesus again and again not to send them out of the area.

A large herd of pigs was feeding on the nearby hillside. The demons begged Jesus, “Send us among the pigs; allow us to go into them.” He gave them permission, and the impure spirits came out and went into the pigs. The herd, about two thousand in number, rushed down the steep bank into the lake and were drowned.

Those tending the pigs ran off and reported this in the town and countryside, and the people went out to see what had happened. When they came to Jesus, they saw the man who had been possessed by the legion of demons, sitting there, dressed and in his right mind; and they were afraid. Those who had seen it told the people what had happened to the demon-possessed man—and told about the pigs as well. Then the people began to plead with Jesus to leave their region.

As Jesus was getting into the boat, the man who had been demon-possessed begged to go with him.

Some people feel sorry for the pigs in this story — a poor, innocent herd of snorting and grunting swine minding their own piggy business on the hillside, and Jesus lets a bunch of evil spirits enter them and run them off a cliff to their deaths in the sea.

I don’t feel sorry for the pigs. I didn’t feel sorry for the halibut I ate for dinner last night either. That halibut sacrificed its life so that I could have some protein. I don’t know how many beasts, birds, fish, trees and plants have likewise died so that I, by eating them, wearing them or otherwise using them, might live. The herd of pigs that night on the shore of the Sea of Galilee died instead of the child of God whom Jesus traveled across the dark and stormy water to save (see Mark 4:35-41).

No match for Jesus

The man’s demons, so powerful he describes them in terms of a Roman legion of 6,000 warriors, made the man torture himself (Mark 5:5). They caused him to be ostracized and chained (verses 3-4). They caused him unrelenting anguish and misery; but they could not destroy him.

Evil spirits these were, hateful and cruel, bent on destruction of whatever they possessed. The instant they entered the pigs, these demons destroyed them. But they could not destroy the one man they possessed.

Under the old covenant, the one Hebrews 10 says was fulfilled in Christ, pigs were ritually unclean, and as such were not even to be touched, much less eaten, by children of the covenant. Jesus, in effect, “sacrificed” a whole herd of swine for the sake of this one tormented man living among the tombs. To Jesus, the deliverance and restoration of one human being is worth whatever sacrifice it takes, even Jesus’ own torture and death on a wood cross at Golgotha.

How long had this man lived in the graveyard under the unforgiving power of this legion of demons? We aren’t told. But we do know this: Jesus was coming. In Mark’s story, the only reason Jesus crossed the Sea of Galilee that evening—bringing the disciples through a storm they feared would kill them all, but which Jesus calmed with a word — was to deliver that poor man from his bondage.

What are your demons? What has you in self-destructive bondage? Know this: whatever your devils may be, they do not have the power to finally destroy you. Jesus is coming, he’s coming for you, to set you free. Not even death can stop him — his or yours; he conquered death itself. He can free you from anything.

Jesus freed him and banned his demons forever by way of the pigs drowned in the sea, symbols of the uncleanness and the end of the demons, as well as of the personal sacrifice of Jesus, who took the uncleanness of the world upon himself and cleaned it — that you and I might live free in him.

It has been said that most people have a hard time relating to the story of the Garasene demoniac, but that drug addicts relate to it easily. That makes sense. I think that anyone who takes sin seriously, like Jesus does, relates easily to this story. Like the demoniac, howling away in the dark from the tombs, even when our sinfulness darkens our hearts, somewhere deep inside we know our need, and we know Jesus is the one who has come to set us free.