John was preaching a baptism of repentance. And this was his message: “After me will come one more powerful than I, the thongs of whose sandals I am not worthy to stoop down and untie. I baptize you with water, but he will baptize you with the Holy Spirit.”

How would you describe the message of John the Baptist? Mark said that John preached “a baptism of repentance for the forgiveness of sins,” but that his message was, “After me will come one more powerful than I, the thongs of whose sandals I am not worthy to stoop down and untie. I baptize you with water, but he will baptize you with the Holy Spirit.”

To set the context, Mark cites the words of Isaiah, combining them with a well-known prophecy from Malachi 3:1, about the messenger whom God would send to “prepare the way for the Lord.”

What is the connection between preparing the way for the Lord and repentance for the forgiveness of sins? And what does that have to do with John’s message that one more powerful than he would come, one who would baptize with the Holy Spirit? Let’s begin in Malachi.

The prophecy Mark quoted from Malachi warned about a coming day of judgment against unfaithful Israel and Judah. In Malachi 2:17, the prophet declared, “You have wearied the Lord with your words … by saying, ‘All who do evil are good in the eyes of the Lord, and he is pleased with them’ or ‘Where is the God of justice?’”

The next verse, Malachi 3:1, is the one Mark used in describing the role of John the Baptist. It is the answer to the rhetorical question just posed by Israel. Here is what the God of justice is going to do.

” ‘See, I will send my messenger, who will prepare the way before me. Then suddenly the Lord you are seeking will come to his temple; the messenger of the covenant, whom you desire, will come,’ says the Lord Almighty.”

But, says verses 2-5, the Lord’s coming will entail a powerful cleansing and purifying of his people. He will set things right and deliver the weak and disadvantaged from their cruel oppressors. “Who can endure the day of his coming? Who can stand when he appears? For he will be like a refiner’s fire or a launderer’s soap.”

What can this mean, considering God’s unchanging faithfulness, but a call to repentance — a call to turn back to God? God will never turn from his covenant faithfulness despite Israel’s unfaithfulness, and for this reason Israel will not be destroyed (v. 6). Therefore God will, in his grace and love, save all who will turn to him (v. 7). It may have appeared for a time that there was nothing to gain by serving God and that only evildoers prosper (vs. 14-15), but that was never really the case (v. 16). God never leaves nor forsakes those who put their trust in him (vs. 16-18). 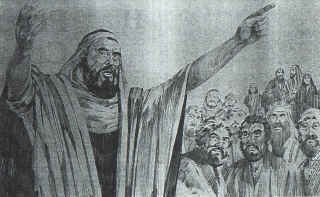 Therefore, God says, before this great and dreadful day of judgment comes, he would send them the prophet Elijah, who would bring together as one the hearts of the fathers and the children, that is, the hearts of Abraham, Isaac and Jacob united with the hearts of the generation upon which this judgment would fall.

In this righteous way (see Romans 3:21-22 and Matthew 3:15), through the sudden coming of the Lord to his temple in cleansing judgment and forgiving grace, preceded by the voice of preparation crying in the wilderness, God would bring together the old with the new.

The prophets of Israel would find their climax in John the Baptist (see Matthew 11:11 and Luke 16:16) and their fulfillment in the transition to the One whose sandals John knew he was “not worthy to stoop down and untie” (Mark 1:7). And wretched sinners like you and me would find love, forgiveness and redemption in the welcoming arms of the Father as he transitions us into his new creation in Jesus Christ (see 2 Corinthians 5:17 and Romans 8:38-39).

The “beginning of the gospel about Jesus Christ” (Mark 1:1), rooted in creation itself and expressing itself unceasingly throughout history in God’s faithfulness to his covenant promises, finds its grand consummation in the One who “will baptize you with Holy Spirit” (v. 8).

In Christ, God has brought together all things in heaven and earth and reconciled them to himself in his new creation (see Colossians 1:19-20 and Ephesians 1:9-10).

Let’s be honest. It might be encouraging or even inspiring to hear that we are a new creation, but the truth is, we don’t often feel very much like a new creation. We usually feel more like a struggling creation, a tired, worried, barely-hanging-on-by-our-fingernails creation.

Don’t let that get you down. That is how things are right now, but it will not always be so. The day will come when the new creation God has already made you to be in Christ will be fully unveiled (Colossians 3:1-4). And when that happens, there will be no more crying, no more pain and no more death (Revelation 21:4).

Even now, our hope lies in this: God has proven in Christ his love for us and his faithfulness to us (consider Romans 5:6-8). He has made our cause his own. He has taken responsibility for us, sins and all. He has taken us under his wing, and he will never let us go. That is why we trust him.

If you have turned your back on God, don’t ever think he has turned his back on you. Quite the contrary. He’s got the porch light on and dinner on the table, waiting for you to come home.