What’s in a name?

The book is named after its leading character, Joshua, who was appointed by God to lead Israel after the death of Moses (Numbers 27:18-23).

The book of Joshua has four main sections: The early chapters describe the Israelites’ preparations to conquer Canaan, and the first steps of the invasion (1:1–5:12). The central event in this section is the Israelites’ crossing of the Jordan River (3:1-17). 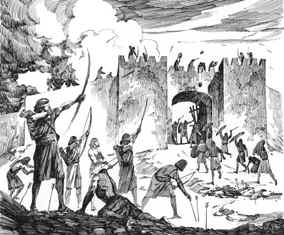 The next section details the warfare between the invading Israelites and the native Canaanites (5:13–12:24). The most important battles were against Jericho (5:13–6:27), Ai and Bethel (8:1-29), an alliance of southern cities (10:1-43) and an alliance of northern cities (11:1-15). The conquest of Canaan was a formative event in Israel’s history. Now the Israelites could describe themselves as the inhabitants of the land God had promised to their forefathers. One could now refer to Israel as a land, not just a people.

The longest section concerns the dividing of the land among the people (13:1–21:45). Even though much of the land had not yet been conquered, Joshua assigned each tribe the territory that would be its inheritance.

The book concludes with a series of postscripts (22:1–24:33). The tribes who wished to settle east of the Jordan returned to their lands (22:1-34). Like Moses, Joshua made a farewell address and gathered the people together to renew the covenant (23:1–24:27). Finally, Joshua’s death is recorded, along with an appraisal of his distinguished career (24:28-33).

How to read this book

In Lesson 1, we saw how often the Israelites rebelled against God and his chosen leaders. And in Judges, the book following Joshua, Israel’s spiritual decline and eventual collapse is described in gruesome detail. But the period of Joshua’s leadership was one of the high points in Israel’s history (24:31).

As you read this book, keep in mind one of its major themes: Joshua’s leadership.

Joshua was a young man when Moses appointed him as one of his ministers, or attendants, during the wilderness journey. Read the following passages which tell of some of his services during those years: Exodus 17:8-16; 24:12-13; Numbers 13:1-16; 14:26-35. At the close of Moses’ career, God chose Joshua to be his successor (Num 27:18), and Moses transferred the mantle of leadership to his faithful attendant and friend (Deut 34:9)….

Read what God said of Joshua in Numbers 27:18 (cf. Deut 34:9). Joshua feared God, believed God, obeyed God, and gloried God. He was a great ruler, commanding the respect of all his subjects (Deut 34:9), maintaining order and discipline, putting the worship of God central in the nation’s government. (Irving L. Jensen, Jensen’s Survey of the Old Testament, pp. 144-145)

The book of Joshua illustrates many important aspects of God’s role and his nature:

God is constantly at war with sin because it is an affront to His holiness and because it destroys people whom He loves and desires to bless (cf. Rom. 6:23). In the book of Joshua, God waged war with sin wherever he found it…. Given more spiritual privilege, His people shouldered more spiritual responsibility. God’s love for Israel led Him to purge out the sin in the camp so that it would not destroy the whole nation. God evidently dealt with Achan as severely as He did [Joshua 7] in order to give His people a clear demonstration of His hatred for sin at the beginning of this new era in their national life. (Thomas L. Constable, “A Theology of Joshua, Judges, and Ruth,” in A Biblical Theology of the Old Testament, ed. Roy B. Zuck, p. 105)

It is always unsettling to have a change of leadership, and not only at the national level. Even the members of a small church congregation can become accustomed to their leader’s way of communicating. Even though the change of a leader or minister can be disorienting, like Israel we must remember that the same ultimate authority is still in charge. If God can allow for differences in styles of leadership according to the personalities of those he appoints, we should be able to adjust.

What this book means for you

Although Joshua is speaking of military battles and geographic territory, we can apply the principles by which God worked there to the spiritual battles we face and the spiritual territory we have yet to possess…. In the light of Joshua Christians should ask themselves:

Your answers to these questions will show you where you stand with God. Like Joshua and the Israelites (1:16-18), you can renew your commitment to God and his Word.

In Canaan there were “seven nations greater and mightier” than Israel (Deuteronomy 7:1, NKJV) that had to be dispossessed and destroyed. But just as no nation could defeat Joshua and Israel under God, so no being in the spirit realm (Ephesians 6:12) can withstand the power of Jesus Christ, who has defeated Satan (Matthew 4:1-11) and is now at God’s “right hand in the heavenly realms, far above all rule and authority, power and dominion” (Ephesians 1:20-21).

Christians must remember that spiritual victory lies in obedience to God through the power of his resurrected Son, Jesus Christ (1 Corinthians 15:51-57; see also Isaiah 25:8).