Unfortunately, the Israelites again reverted to their sinful ways and “did evil in the eyes of the Lord” (Judges 6:1). This phrase recurs often in the book of Judges. The Israelites’ sin was not only “in the eyes of the Lord,” it was also against the Lord. When we sin, although we harm ourselves and others, our sin is ultimately against God because it rejects his laws and his authority over us. God alone, through the death of his Son, Jesus Christ, provides for our forgiveness. David prayed to God, “Against you, you only, have I sinned and done what is evil in your sight” (Psalm 51:4). When we acknowledge that we have sinned against God, we begin to experience God’s forgiveness.

This time, God used the Midianites to punish the Israelites. The Midianites were desert dwellers descended from Abraham through his second wife, Keturah. They proved to be a thorn in Israel’s flesh on more than one occasion. During Israel’s wanderings in the wilderness, the Midianites conspired with the Moabites to hire Balaam to curse the Israelites (Numbers 22:4-7). When that plot failed, Midianite and Moabite women seduced the Israelites into worshiping Baal, thus causing God to be angry with Israel (Numbers 25:1-9).

Now that the Israelites were settled, the Midianites used different tactics. They swept in from the desert on their camels, destroying the crops and ravaging the land before retreating: “Midian so impoverished the Israelites that they cried out to the Lord for help” (Judges 6:6).

Once again, the Israelites waited until the situation was desperate before turning to God for help. This recurring theme in the book of Judges teaches us an important lesson. We, like the ancient Israelites, get ourselves into trouble when we leave God out of our lives. And often we make the problem worse by exhausting all other alternatives, turning to God only as a last resort.

We cannot go contrary to God’s ways and expect to avoid the consequences of our actions. The apostle Paul wrote: “Do not be deceived: God cannot be mocked. A man reaps what he sows” (Galatians 6:7). But if we turn to God in humility and repentance, he is ready and willing to give us the help we need, as he helped the ancient Israelites when they repented.

However, God also wants us to understand why we get into difficulties. So, before sending the Israelites a deliverer, God sent a prophet to show why the Midianites had been allowed to oppress them:

“This is what the Lord, the God of Israel, says: I brought you up out of Egypt, out of the land of slavery. I snatched you from the power of Egypt and from the hand of all your oppressors. I drove them from before you and gave you their land. I said to you, ‘I am the Lord your God; do not worship the gods of the Amorites, in whose land you live.’ But you have not listened to me” (Judges 6:8-10).

God continued to show mercy to the Israelites and raised up a man named Gideon to deliver them. One day, when Gideon was threshing wheat in the confines of a winepress (he was hiding the crop from the Midianites), an angel appeared to him, calling him a “mighty warrior” (verse 12). Gideon was not the brash, self-confident type. He described himself as the least important member of the weakest clan in Manasseh (verse 15).

Like Moses, Gideon needed encouragement before he was ready to begin his task. God told Gideon, “I will be with you, and you will strike down all the Midianites together” (Judges 6:16). Gideon asked for a sign that God was with him. Gideon placed an offering of goat meat and unleavened bread on a rock, and when the angel touched the offering with the tip of his staff, fire flared from the rock, consuming the offering.

Gideon was now prepared to accomplish his first task — tearing down his father’s altar to the pagan god Baal — but only at night. He was still afraid of his family and the local townsmen (verse 27). Gideon had taken his first cautious step of faith. When the Midianites, Amalekites and other eastern peoples joined forces against Israel, “the Spirit of the Lord came upon Gideon, and he blew a trumpet, summoning the Abiezrites to follow him. He sent messengers throughout Manasseh, calling them to arms, and also into Asher, Zebulun and Naphtali, so that they too went up to meet them” (verses 34-35).

Even after this, Gideon needed further evidence that God was with him, so God patiently gave him two more signs (verses 36-40).

God is always willing to spend time working with his people, but eventually he expects results. Having bolstered Gideon’s faith, God now impressed upon him that it was only through faith, not military strength, that Israel would prevail over Midian.

God commanded Gideon to dismiss all of the fearful men, upon which 22,000 men left, and 10,000 remained (Judges 7:3). God then told an undoubtedly bewildered Gideon, “There are still too many men” (verse 4). God eventually left Gideon with an army of just 300 men.

In the night, Gideon arranged his meager troops around the valley in which the Midianites were camped. At Gideon’s signal, they lit torches, blew trumpets and shouted, “A sword for the Lord and for Gideon!” (Judges 7:20). 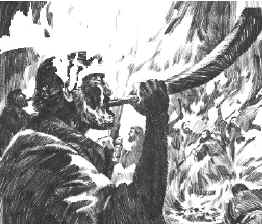 Gideon’s army watched as the Midianites panicked and retreated in disorder, without a single Israelite needing to draw a sword (verse 22). Gideon may have been fearful at first, but he grew as God worked through him. In the remainder of the story, three incidents show how he developed confidence and wisdom.

The first incident involved the leaders of Ephraim, whom Gideon had not initially asked to join in the fight against Midian (Judges 8:1). Later, during the heat of the battle, Gideon called on them to join in the pursuit of the escaping Midianites. After the battle, the Ephraimites angrily confronted Gideon. Being God’s appointed judge, Gideon could have told them he was following God’s orders. Instead, he assured them diplomatically that their contribution had been even greater than his own. Gideon pointed out that their rear-guard action led to the capture of two enemy officers, thereby leaving the Midianites without effective military leadership (verses 2-3). By complimenting the Ephraimites, rather than justifying himself, Gideon avoided a potentially volatile situation. Gideon’s action exemplifies the wise saying: “A gentle answer turns away wrath” (Proverbs 15:1).

The second incident concerns the men of Succoth and Peniel, who refused to help Gideon pursue the Midianites. But Gideon had learned that God’s work would always succeed, with or without the help of any particular human being. Undeterred, Gideon overtook and vanquished the Midianite army, which considerably outnumbered his own.

The third incident illustrates Gideon’s acknowledgment of God as the true king of Israel (Judges 8:22-23). Though the people wanted to make Gideon their king, Gideon refused, reminding them that God was their true king. Gideon understood the importance of putting God first — for the sake of the nation as well as each individual citizen.

These incidents illustrate the extent to which Gideon had grown. He started as a man who doubted he could fulfill his God-assigned role. He ended as a great man of faith, accomplishing his tasks with tact, determination and humility.

Abimelech: the man who would be king

When Gideon died, one of his sons, Abimelech, attempted to usurp the title King of Israel — an office and position reserved for God (Judges 9). Abimelech’s short reign was marked by treachery and bloodshed. It was a foretaste of what would happen to the Israelites if they rejected God as their king.

Abimelech was a son of Gideon (Judges 8:31), but he did not share his father’s love for God. In sharp contrast to the judges who acknowledged God as the only true king over Israel, Abimelech aggressively sought the throne of Israel for his own ends. Viewing his 70 brothers as potential rivals, Abimelech murdered all but one of them. He was supported in this wickedness by his mother’s family and the leaders of Shechem. Only Jotham, the youngest, escaped. Abimelech then had himself crowned king (Judges 9:5-6).

When news of this reached Jotham, he climbed up to a rock ledge on the south side of the nearby Mt. Gerizim, and cried out God’s warning to the people of Shechem below (verse 7). From this natural pulpit, Jotham related a fable about trees vying for supremacy: “One day the trees went out to anoint a king for themselves” (see verses 8-15). The olive tree, the fig tree and the vine rejected the offer of kingship. They were content to grow where God had planted them and to produce the kind of fruit God desired. The implication here is that these righteous trees refused to tear their roots from the soil and soar above the other trees in a presumptuous act of self-promotion.

“Gideon…represented one of the good trees invited to become king [Judges 8:22], though exact identifications are not needed. Noble, capable leaders like Gideon believed that the theocracy, not a monarchy, was the best form of government” (The Expositor’s Bible Commentary, vol. 3, pp. 439-440).

The thornbush represented Abimelech, who craved power and prestige (Judges 9:15). Its invitation to “take refuge in my shade” refers to the traditional role of the king, who offered special protection to those traveling on his behalf. They were said to be “in his shade” (Hosea 14:7; see also Isaiah 30:2 and Daniel 4:12). In reality, as the original audience knew, a thornbush cannot give shade.

Jotham’s point was this: a productive person would be too busy doing good to want to bother with power politics. A worthless person, on the other hand, would be glad to accept the honor — but he would destroy the people he ruled. Abimelech, like a thornbush, could offer Israel no real protection or security. (Life Application Bible, NIV, commentary on Judges 9:7-15)

The words “let fire come out of the thornbush and consume the cedars of Lebanon” (Judges 9:15) refer to the wrath of Abimelech, which would come upon the leaders of Shechem. This is exactly what happened: Abimelech eventually destroyed Shechem (verse 45) and burned its leaders in the city tower (verses 46-49). God’s prophecy against Abimelech (verse 20) also came true: This renegade Israelite was finally killed at Thebez (verses 50-54). His brief flirtation with kingship had cost him his life.

Throughout Israel’s history, Abimelech was remembered as the man who was killed by a woman (2 Samuel 11:21). The man who would be king became an object of scorn and derision.