Grace Communion International teaches that the God of the Bible is the Creator. We believe in the inspired declaration of Genesis 1:1, “In the beginning God created the heavens and the earth.” We believe that God gave the scientific record for human instruction and knowledge and that there is no conflict between the Bible and scientific discovery. We believe that when the Bible and scientific discovery appear to conflict, that one or the other has been misunderstood. Therefore, we do not deny the evidence from science that indicates a long history of life on this planet, nor do we deny that God could have created an evolutionary process for the development of species. We believe that only God can create life, and that the Bible does not reveal exactly how he has done this. Therefore, if evolution is true, we believe God is the author of it. 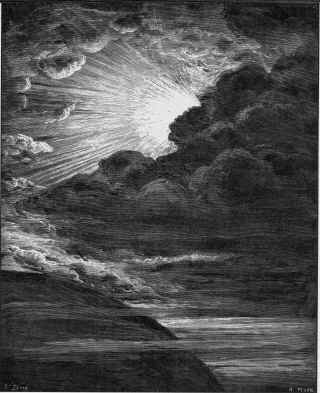 The church teaches that God created all things out of nothing, whether we are speaking of living things, inanimate matter, energy, space, or even time itself. However, the Bible does not explain theprocess of creation God used in causing any aspect of it to come into being, or how that creation is sustained or changed over time. In short, Scripture does not tell us how or when God created all that exists. It is at this point that the question of the meaning of Genesis 1 becomes paramount. What, exactly, does the chapter tell us about the creation of all things?

This article suggests that Genesis 1 is simply a theological statement about God as Creator. This article does not attempt to critique all the viewpoints about Genesis 1 that attempt to reconstruct the scientific history of all things, including earth’s various life forms, according to the six-day pattern that forms the  backbone of Genesis 1.

Genesis 1 is not a description of how God created or how long the creation process took. This chapter and the rest of Scripture teach the central truth that God is Creator of all that exists, and because he exists there is purpose and meaning to human life. But what Genesis 1 does not explain, in a scientific way, is how all things came to be what they are today. That is, the mechanisms of creation God may have used are not described or explained, or even mentioned. Therefore, there is no need to try to “fit” the discoveries of science from geology and paleontology into the Genesis record, nor is there a need to explain this record in scientific terms.

Basically, Genesis 1 makes the case that whatever exists in the physical world is the product of God’s creation. Genesis 1 asserts something about who the Creator is. It does not explain in any scientific sense how the creation came into existence, when it was created or whether it developed through time in some way. In the context of its day, Genesis 1 is a statement about who is Creator over against pagan claims for how the creation came about and which gods and goddesses were responsible for its development.

Genesis 1 was not meant to be a scientifically precise explanation of how God accomplished the creation. It is not a science text or treatise. In fact, none of the Bible could be such because it was written thousands of years before the scientific method as we know it was developed. How could Genesis 1 have spoken “scientifically” to people who did not know anything about scientific discovery or “scientific language” in the way that we do? In fact, Genesis 1 did not need to speak in scientific terms because its point is theological, not scientific. The account could make its theological point effectively by describing the process of creation within the context of human understanding as it was at the time the account was written. It uses language and concepts that ancient Hebrews could understand.

Many Christians believe that Genesis 1 is a literal description of the beginning of the universe. However, many others recognize that a literal reading of the account is inconsistent with evidence from scientific research and with a literary analysis of its structure. The majority of Old Testament scholars who have asked the question about the kind of literary genre that comprises Genesis 1 believe its author did not intend to write history in any modern sense. The author was interested in asserting that God, ultimately, is Creator. The “how” or the “when” of the creation in a scientific sense would have been a mystery to him. Hence, there is no need to read the account in a literal fashion, or to try to “fit” the findings from paleontology, geology and radioactive dating into its “day” format.

Once one can think in nonliteral terms regarding the material in Genesis 1, one can recognize that the present geological and radiometric time measurement of the earth’s age as being about five billion years old is not inconsistent with the biblical account. The biblical account simply doesn’t address the age of the earth.

We can see the account of creation narrated in Genesis 1 as being given in the form of sacred poetry, not as a scientific treatise. Creation is described as having taken place in six days, with enough time left for a day of “rest” for the Creator. The “six days” outline of creation can be seen as the writer’s literary device, in which he describes various important aspects of the solar system and earth, as well as the general categories of the created order. The point? Simply that God is the creator and re-creator of all categories of things that exist and the sustainer of his creation.

But why does the author use the pattern of seven days? Again, the reason can be seen as theological. The writer of Genesis 1 could have used a one-day creation cycle or a monthly cycle as a framework within which to tell his story that God is Creator. However, he lived under the old covenant in which the weekly, seventh-day Sabbath was a “sign” of (Exodus 31:12-17), that is, symbolic of God’s grace and his love for Israel. The writer would find it quite natural to use the setting of a weekly cycle to emphasize the seventh day as a day that identified who God was. The Sabbath rest commemorated God as Creator just as the physical creation did.

As an Israelite, the writer would have been keen to extol God as the one Lord and Creator of the universe, who was also to be identified by the sign of the weekly Sabbath that he gave to Israel. The Sabbath rest symbolized God’s creative acts (Exodus 20:11) and his grace of rest from slavery that he had bestowed on Israel (Deuteronomy 5:15). The granting of his gracious love in rest for his people was an act by which Israel’s God could be known, perhaps even more so than he could be known from his physical creation.

What is described in Genesis 1 is primarily a re-creation of earth and heavens that were chaotic and formless – a place where human life as we know it could not exist. The writer presents to us a God who is a Restorer of all things for the benefit of his human children. Out of his love, he recreates earth so that it is conducive to the needs of man. He also recreates a relationship of grace with his people by taking them out of a chaotic, evil world and bringing them into himself – into his place, the Promised Land – thus providing them rest, as symbolized by the Sabbath.

We see, then, that it is not necessary to take the “creation week” as a literal week. Rather, we can appreciate the author’s literary creation and his important theological statements. If the six days of Genesis 1 were truly 24-hour days, we would have basically an instantaneous creation. The fact is, though, that the writer of Genesis doesn’t speak to the question of “instantaneous” creation, creation by “evolutionary development” or some combination of both processes. Nowhere in biblical revelation is the manner and time-line of creation given. To insist that Genesis 1 tells us “how long” creation took is to trivialize the theological revelation it provides.

Of course, as humans we are interested in finding out how our universe “works.” Science has been working to learn more and more about the mechanism of creation. Yet, as limited human beings, we are not yet in a position to make any final judgment regarding all the details of how the creation came about, or how life may or may not have “developed” through time. Perhaps with more decades of scientific research the history of life will become clearer. Through it all, we believe that the one God, as Creator, is responsible for the creation’s existence out of nothing.

To repeat, we do not know from the biblical record how or when God created all things, including the universe. On the other hand, scientists have discovered many interesting facts that could explain how this or that aspect of creation may have come into being or developed.

But scientific investigation is not the domain of Scripture. Rather, the Bible is interested in telling us that God is Creator. It does not tell us the process by which the creation came into existence, or whether it may have developed over the eons. Therefore, we believe that the biblical witness about the creation complements scientific fact and discovery. In the church’s view there is no contradiction between the discoveries of science, rightly understood, and the biblical assertion that God is the Creator of all that we see. This is the point that Genesis 1 seeks to demonstrate.

Our church does not believe that there is a conflict between scientific knowledge and a correct interpretation of Scripture. Sadly, however, there are special pleaders and extremists in both the world of science and Christianity. Each group sometimes ends up denying or distorting the validity of the other’s beliefs, facts or understanding.

What always remains as truth is that God is the Creator, re-creator and sustainer of all that exists. When we think about the marvelous complexities of nature and life that science has discovered, God becomes ever more awesome to us. This is the story that Genesis 1 so eloquently tells us, but from a simple, theological point of view.